RIOULT Dance NY, a leading American modern dance company with a classic sensibility, kicks off a year-long celebration of its 20th anniversary with performances on February 14-15, 2014 at 8pm at the 92nd Street Y Harkness Dance Center (92nd Street and Lexington Avenue, NYC).  Tickets are $20 and are available at www.92Y.org/dance or 212.415.5500.

In 1992, The New York Times dance critic Jennifer Dunning wrote, “If Pascal Rioult keeps on creating the kinds of dances he has been choreographing with such authority for a mere three years, he may have to leave his job as a soloist with the Martha Graham Dance Company and become a full-time choreographer.”  In 1994 Rioult officially incorporated his company.  Twenty years later, he will pay homage to his mentors May O’Donnell and Martha Graham with this unique program, providing insight to the evolution of an artist and an art form. It marks a rare opportunity to see the works of these dance pioneers in an intimate setting, complete with video montages exploring the relationships between the pieces. Additionally, the program also offers an exclusive sneak peak at part of what RIOULT will present at its 20th Anniversary New York Season this June. 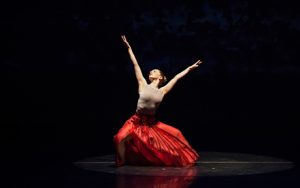 The program will open with a restaging of May O’Donnell’s Suspension (1943) that has been set on the company by former May O’Donnell Dance Company dancers Lynn Frielinghaus, Barbara Allegra Verlezza, and Nancy Lushington.  The evening also includes Martha Graham’s El Penitente (1940) set to music by Louis Horst, with Mr. Rioult, Joyce Herring, and Kenneth Topping all teaching their former roles to current dancers.  Two pieces by Pascal Rioult complete the evening: Views of the Fleeting World (2008) set to J.S. Bach’s “The Art of Fugue” and Wien (1995) set to Maurice Ravel’s “La Valse.”