“Beg, borrow or steal a ticket if you have to,” – Entertainment.ie

“Gorgeous, with glitter on top” – The Daily Mail 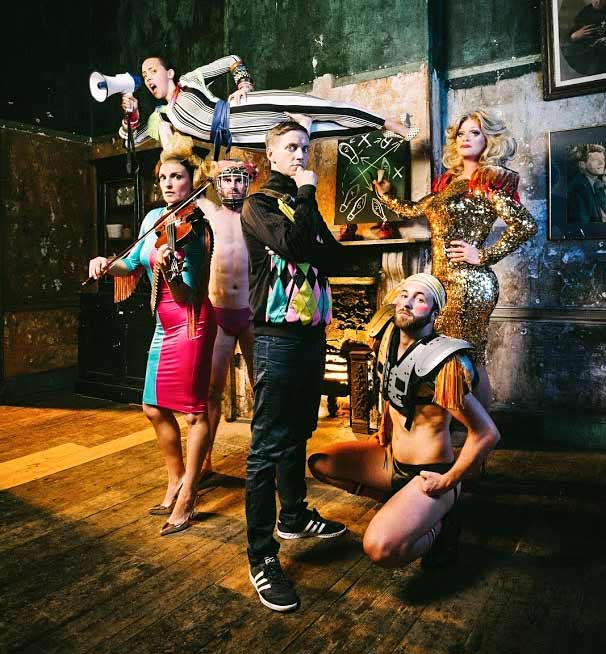 ew York, NY (January 3, 2018) – RIOT, the award-winning Irish theatrical extravaganza that mixes high art and trash culture, will have its American premiere at NYU Skirball, February 15 – 17 at 7:30 pm.  A blend of cabaret, dance, circus, comedy and powerful spoken word, Riot is both party and politic, a love letter of hope to the future, a divine celebration – and a blunt criticism – of the world today.

THISISPOPBABY, self-described “theatre makers, club creatives and good time gurls [sic],” lands somewhere between pop culture, counter culture, queer culture and high art.  Founded in 2007, the Dublin-based company has played to sell-out crowds and critical acclaim throughout Ireland and around the world, and created Ireland’s Queer Notions Arts Festival. Its productions have played to over 100,000 people around Ireland, the UK, Australia and beyond, winning five major theatre awards, including Best Production at the 2016 Dublin Fringe Festival, with nominations for 14 more.

RIOT is co-presented with  Irish Arts Center. The NYC-based arts and cultural center is dedicated to projecting a dynamic image of Ireland and Irish America for the 21st century, building community with artists and audiences of all backgrounds, forging and strengthening cross-cultural partnerships, and preserving the evolving stories and traditions of Irish culture for generations to come.

The all-star cast includes Panti Bliss, Ireland’s Queen of Drag; Up & Over It (former Riverdance leads); and Megan Riordan (Once – TheMusical), and is created and directed by Jennifer Jennings and Phillip McMahon.

Panti Bliss has the distinction of being Ireland’s most famous drag queen as well as an international political activist and outspoken supporter of gay rights. Her infamous speech in support of gender equality played a major role in Ireland’s legalization of same-sex marriage in 2015.  The speech was called “the most eloquent Irish speech in almost 200 years” and was praised by Dan Savage, Ru Paul, Graham Norton, Madonna and countless others. A video of the speech has received over 800,000 views, and her Tedx Talk “All the Little Things” has been viewed by 400,000 people.

Panti has danced with Cyndi Lauper onstage in Japan, regularly hosts the annual Dublin Pride celebrations, and is the subject of a critically acclaimed documentary The Queen of Ireland. Her stand up show High Heels in Low Places played to stellar reviews and packed houses across Ireland, the UK, Europe, Australia and the U.S. Her memoir, Woman in The Making, written with her alter ego Rory O’Neill, was a bestseller in Ireland.

Emmet Kirwan is a Dublin-based actor, writer and filmmaker. He is a graduate of Trinity College’s Samuel Beckett Centre and has performed at The Gate and The Abbey Theatres.  He has written for Irish television and film, and won the IFTA-winning short film  “Heartbreak”, originally commissioned and written for RIOT.

Lords of Strut, Street Performance World Champions and unlikely heroes of Britain’s “Got Talent 2017,” are on a mission to change the world with dance.  The spandex-wearing duo, Cian Kinsella and Cormac Mohally, mix character comedy with acrobatics and slapstick, resulting inmanic and sexy comedy.

Suzanne Cleary and Peter Harding of Up and Over It  accumulated championship titles on the competitive Irish dance circuit before joiningRiverdance productions on Broadway and around the world.  They first performed as Up and Over It at the 2009 Edinburgh Fringe Festival, shortly before their short “hand dance” video  went viral, leading to appearances on the global “Got Talent” franchise. Their videos have been seen by over 12 million people.

Ronan Brady was a secondary school teacher and soccer star before running away to join the circus and becoming a full-time physical artist specializing in Cyr Wheel and Duo Trapeze. He has performed across the U.K. and with international festivals.

Megan Riordan’s credits include Once-the Musical! in Dublin and South Korea. She has performed in plays across the U.K. in film and television, and has a leading role in the award-winning series An Klondike.

Adam Matthews is a Dublin-based singer and songwriter. He has performed at music festivals and venues across Ireland, and is currently recording with a new band Phoeno.

Nicola Kavanagh has performed in plays and festivals across the U.K. She has toured and recorded with the Irish choral group, Anúna.

NYU Skirball’s unique place as a vibrant cultural center within New York University enables it to draw on the University’s intellectual riches and resources to enhance its programming with dialogues, public forums and conversations with artists, philosophers, scientists, Nobel Laureates and journalists. www.nyuskirball.org.