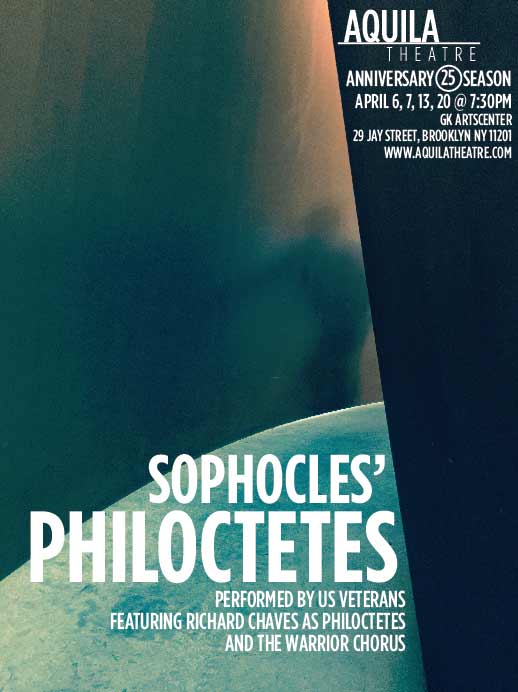 New production to be presented April 6 — 20, 2016 at The GK ArtsCenter in DUMBO, Brooklyn (former home of St. Ann’s Warehouse)

NEW YORK, NY, Mar. 15, 2016 — Aquila Theatre, one of the foremost producers of classical theater in the United States, has announced casting for its upcoming New York City production of Sophocles’ Philoctetes.

The cast will be led by Richard Chaves US ARMY (Philoctetes) is a Vietnam War veteran and actor of stage and screen. He was one of the original creators and performers of TRACERS in New York at the Public Theater, at the Royal Court Theatre in London and the Odyssey Theater in Los Angeles. Major film roles include PREDATOR, WITNESS, and DEAR AMERICA: LETTERS HOME FROM VIETNAM, TV includes WAR OF THE WORLDS, STAR TREK VOYAGER, LA LAW, MIAMI VICE, HILL STREET BLUES, DALLAS and WEAPONS OF MASS DISTRACTION, to name just a few. Richard is the recipient of the Drama-Logue Award, the Drama Critics Circle Award, and the New York Theater World Award.

The cast of Philoctetes will also feature Johnny Meyer US ARMY RANGER (American Volunteers) as Neoptolemus, Ed Walsh US MARINE (House of Cards, Alpha House, American Repertory Theater) as Odysseus, Brian Delate US ARMY (Salome with Al Pacino, Soldier’s Heart) as Phoenix, Caleb Wells US MARINE (Person of Interest, Red Oaks) as Leukos, Michael Castelblanco US MARINE as Alcimus and members of the Warrior Chorus, a group of military veterans who are writers, performers, and visual artists that are part of Aquila’s NEH program.

Philoctetes A combat soldier is inflicted with an incurable and insufferable injury. The soldier’s comrades cannot bear to hear the cries of pain or the sight of the wound. They maroon the injured soldier and sail away.  The soldier is forgotten. That is, until ten years later, when they learn the cannot end the war without the help if the wounded warrior. Sophocles’ ancient play, Philoctetes, translated by Peter Meineck, captures a reality for all combat veterans who have been physically wounded and explores ethical dilemmas, as dynamic and relevant today as they were to the Greeks 2500 years ago. Aquila’s previous exploration of this ancient work, A Female Philoctetes, premiered in April 2014 to sold-out audiences at Brooklyn Academy of Music Fisher’s Hillman Studio and has been featured on NPR’s “All Things Considered” and “The Diane Rehm Show.”

Warrior Chorus is a national program funded by the National Endowment for the Humanities that trains veterans in arts and humanities public programming.

Aquila Theatre will celebrate its 25th Anniversary with a three-week celebration featuring productions of Romeo and Juliet, Adventures of Sherlock Holmes and Sophocles’ Philoctetes.  Performances in rep will begin April 6, 2016 at the brand new GK Arts Center (former home of St. Ann’s Warehouse), through April 23.

This unique triple bill will mark Aquila’s 25th anniversary. Founded by Peter Meineck in London in 1991, Aquila moved to the US in 1997. The first production in New York in 1999, The Iliad: Book One at Lincoln Center’s Clark Studio, was described by the New York Times as  “ensemble precision, sensitivity and unity of Aquila is exciting to experience.” Aquila’s pioneering hallmark was to stage bold productions of classical works with small casts of elite highly trained actors, doubling, tripling and even quadrupling in roles, a device now more common in the theatre world. In that vein, two New York productions of Shakespearean comedies, Much Ado About Nothing and Comedy of Errors, both ran for over a year in the city, with Much Ado being one of the first downtown shows to re-open after 9/11 and then being invited to a perform at the White House.

Since 1991 Aquila has played to over 750,000 people in 47 states and 12 countries with 19 shows in New York City at venues such as 45 Bleecker, Manhattan Ensemble Theatre, Theater Row, Classic Stage Company, BAM Fisher, Lincoln Center and Carnegie Hall.  The New York Times War Correspondent Chris Hedges joined Aquila on tour in 2001 describing the works as “building powerful ensemble productions and the kind of well-disciplined troupes that are increasingly rare in Britain and the United States.”

Aquila’s past artists have include David Oyelowo (Prometheus Bound) and Olympia Dukakis (Agamemnon) and many have gone on to contribute to many of the current leading theatre groups in the United States. Aquila is also known for its extensive public programming and work with veterans. In 2008, the company received a Chairman’s Special Award from the National Endowment for the Humanities and the largest grant ever awarded by that agency, $800,00o for a national program called Ancient Greeks/Modern Lives. That work continues with the Warrior Chorus also supported by the NEH, which forms part of the Philoctetes production included in this remarkable anniversary season.

The Aquila 25th Anniversary Season is:

Adventures of Sherlock Holmes, described by DC Metro Arts as “a slick, fast-paced, and highly entertaining rendition of that old sleuth from Baker Street — and proves once again (as if we weren’t already learning fast in DC) that gender norms, when they are overturned on stage, make for some intriguing and refreshing performance. The genius behind director Desiree Sanchez’s production is that it is simultaneously old and new; an almost unusually faithful rendition of three of Sir Arthur Conan Doyle’s original stories combined with an ice cold modern staging that incorporates elements of smoky film noir as well as laugh-out-loud physical comedy.” Adventures of Sherlock Holmes and director Desiree Sanchez were DC Metro’s pick for best play and best director of 2015.

Aquila’s Romeo and Juliet is a strikingly raw, physical and psychological approach to a well-known classic that strikes at the heart of the social and emotional problems that determine the events of this tragic story. The production uses Shakespeare’s rarely seen 1st quarto version and focuses on the essential characters played by a cast of five actors that never leave the stage. This production has Juliet tethered to her mother by a 30-foot white silk dress with both the audience and the actors bound by the physical and emotional consequences of each other’s actions. Sam Hall, of DC Metro writes: “It’s a body-felt joy of the senses to hear and see Aquila Theatre’s new production of Romeo and Juliet …The show is excellent point by point…shifting effects mesmerize–and at times astound.”

Aquila Theatre Artistic Director, Desiree Sanchez adapts and directs Romeo and Juliet, Adventures of Sherlock Holmes, and Philoctetes. Past productions she has directed and adapted include Tempest, Wuthering Heights, Twelfth Night, Fahrenheit 451, A Female Philoctetes at BAM Fisher’s Hillman Studio, The Taming of the Shrew, Cyrano de Bergerac, Herakles at BAM and the Festival of the Aegean in Syros, Greece and the Michael Cacoyannis Foundation in Athens, Macbeth at the Gym At Judson in NYC, The Importance of Being Earnest and Six Characters in Search of an Author, at Skirball Center for the Performing Arts, NYC.

The following performances will be held at The GK ArtsCenter, 29 Jay Street, Brooklyn, NY 11201:

Prior to the season at GKArts, the following performances of ADVENTURES OF SHERLOCK HOLMES will be held at Queens Theatre, 14 United Nations Avenue, Corona, NY: