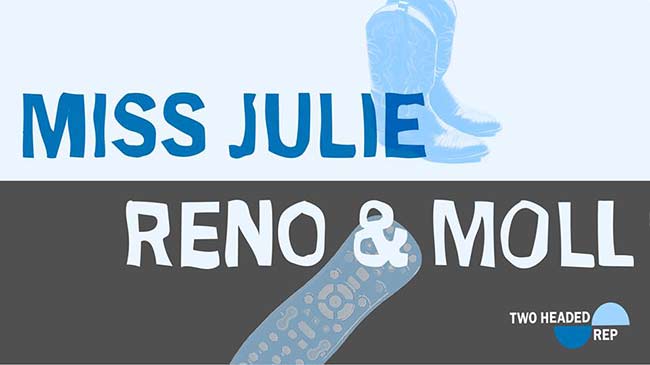 In Rep With A New Adaptation Of August Strindberg’s

Two Headed Rep will present the World Premiere of Emma Horwitz’s Reno & Moll, directed by Lily Riopelle (this movie, Samuel French OOB Short Play Festival winner) in rep with a new adaptation of August Strindberg’s Miss Julie, written by Brittany Allen (Too Many Lenas 3: Let Them Eat Cake at Ars Nova’s ANTFEST and New Ohio’s Ice Factory Festival), Will Arbery (We Were Nothing! with director Lisa Szolovits), and Amanda Keating(RETREAT at EST/Youngblood), directed by Molly Clifford (The Elephant in the Room at FringeNYC) at The Workshop Theater’s Jewel Box Theater (312 West 36th Street, 4th Floor), November 4-18 with performances Wednesday through Friday at 7:30pm, Saturday at 2pm & 7:30pm, Sunday at 2pm, and Monday at 7:30pm. Tickets ($18 each or $23 for both shows) are available online at www.twoheadedrep.com. Runtime for the full evening is 2 hours and 45 minutes, including intermission. Each play runs 75 minutes.

This fall, Two Headed Rep’s pairing of plays find themselves in the workplace, inhabited by people who, every day, confront, consider, and carry out what’s expected of them. What weighs on us when we’re expected to do everything? What about when nothing is expected of us? And what do we do about the dog? Two Headed Rep asks these questions and more with their fall rep: a new adaptation of Miss Julie by Brittany Allen, Will Arbery, and Amanda Keating, and Reno & Moll, a new play written in response to Strindberg’s classic by Emma Horwitz.

In Reno & Moll, Harper has played the most beloved dog on children’s TV for ten years. She knows her lines and she knows her choreography, she just doesn’t know why she’s still doing this job. Is it for the fans who adore her? Do they adore her or just her canine alter ego? And what’s the difference anyway? When Harper’s longtime co-star leaves the show, she wonders whether it might be time to make a change as well. But how do you change when you’ve played the same character for so long that you can’t remember what it’s like to be yourself?

The cast will include Alton Alburo* (The Wong Kids in the Secret of the Space Chupacabra Go! with Ma-Yi; Friends From College on Netflix), Zoë Geltman (The World My Mama Raised with Clubbed Thumb; Bear Slayer! at Ars Nova), and Eva Victor (Story Pirates).

To bring Miss Julie into the 21st century, Two Headed Rep has commissioned three writers to explore and adapt one character each from Strindberg’s classic to form a new, singular work. This process mirrors the play itself: when three people, each practically on different planets, find themselves crowded in a single room, they insistently prod, occasionally torment, and, most importantly, desperately need each other. It’s Halloween night in the break room of Count’s Chicken, a fast food franchise in Corsicana, Texas. What Julie, Gene, and Krissy expect of themselves and each other drives them to questions they thought they’d never ask and choices they never thought they’d make.

TWO HEADED REP produces new plays in repertory with the classic plays that inspire them. By creating a space in which old and the new exist side by side, we provide our audience with a living, breathing artistic and cultural context for the works we present. We embrace the repertory format as a means to enrich the audience experience of the old and the new, and foster an enhanced understanding of the relevance and necessity of each. Previous reps have includedElectra with Amanda Keating’s RETREAT, TARTUFFE with Lizzie Stern’s Don’t Make Yourself Crazy, and Lysistratawith Jacob Perkins’ Restaurant in D Major. www.twoheadedrep.com