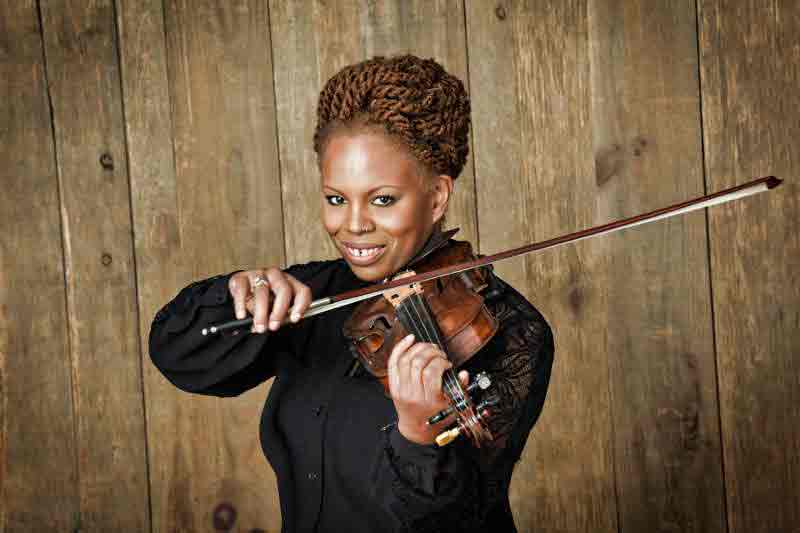 “Ms. Carter is enormously gifted, bringing a blues sensibility to her improvisations.”

Brooklyn Center for the Performing Arts at Brooklyn College continues its 2015-16 season on Saturday, April 16, 2016 at 8pm with Regina Carter’s Southern Comfort.  Violin virtuoso and MacArthur fellow Regina Carter pays a tender tribute to her paternal grandfather, an Alabama coal miner, in an inspirational concert drawing from Appalachian fiddle tunes, church hymns, and the joyous Southern folk music that infused her childhood. Tickets are $35 and can be purchased at BrooklynCenter.org or by calling the box office at 718-951-4500 (Tue-Sat, 1pm-6pm).

With Southern Comfort, Carter interprets her won roots through a modern lens. She sought out distant relatives and books about the era in which her grandfather lived. From there, she went to the Library of Congress and the renowned collections of folklorists such as Alan Lomax and John Work III, digging deep into their collected field recordings from Appalachia.

“When I would hear some of these field recordings, if I heard something that touched me I put it on the list,” said Carter. “I had maybe 50 tunes that I felt strongly about, and I finally forced myself to work more on those to stop myself from collecting more.” The 11 tracks on Southern Comfort include Carter’s interpretations of Cajun fiddle music, early gospel, and coal miner’s work songs, in addition to some more contemporary tunes.

“In the Appalachians there were Scottish and Irish descendants, slaves, and Native Americans. It was a cultural hodgepodge, and the music resulting from it is intoxicating. This disc was to pay homage to my family,” said Carter, “but it turned out to be so much more.”

The musicians on this recording bring a different mixture of backgrounds to the project, including guitarists Adam Rogers and Marvin Sewell, bassists Chris Lightcap and Jesse Murphy, accordionist Will Holshouser and drummer Alvester Garnett, who also provided arrangements. Stefon Harris, Xavier Davis and Nate Smith also contributed arrangements, about which Carter expressed, “Each arranger brings out something musically that’s unique to them which speaks to me.”

Said Chuck Mitchell, Senior Vice President of SONY Masterworks, “We’re tremendously pleased to have the incomparable Regina Carter with us at Masterworks. Her musical odyssey has been charted through a series of unforgettable recordings over the years, and Southern Comfort is the latest and perhaps the most eloquent expression of her deep and profoundly enlightening musical humanity.”

Violin virtuoso Regina Carter is considered the foremost jazz violinist of her generation. Winner of a coveted 2006 MacArthur Foundation “Genius” Fellowship, she is also a Resident Artistic Director at SF JAZZ.

In 1987, she joined the all-female pop-jazz quintet Straight Ahead and appeared on their first three albums before leaving the band in 1991 and moving to New York, where she picked up session work with artists including Aretha Franklin, Lauryn Hill, Mary J. Blige, Billy Joel, Dolly Parton, Max Roach and Oliver Lake.  She released her self-titled solo album on Atlantic in 1995, followed by Something for Grace, an album dedicated to her mother and released in 1997.  Carter also toured with Wynton Marsalis that same year, then switched to the Verve label where she released Rhythms of the Heart in 1999. Motor City Moments, a tribute to her hometown, followed in 2000.

In December 2001, she traveled to Genoa, Italy, and made musical history by being the first jazz musician and the first African American to play the legendary Guarneri Del Gesu violin, made in 1743 and owned by classical music virtuoso and composer Niccolo Paganini. This encounter inspired her 2003 album, Paganini: After a Dream, which featured works by Maurice Ravel, Claude Debussy and Italian film composer Ennio Morricone. She recorded I’ll Be Seeing You: A Sentimental Journey in 2006 as a tribute to her late mother.  That same year Carter was awarded the MacArthur Fellowship, given to a highly select group who “show exceptional merit and promise for continued and enhanced creative work.”

Reverse Thread, released in May 2010, was a celebration of traditional African music via a contemporary perspective. Carter also took her pioneering spirit on the road in the late summer and fall of 2012 for a two-month world tour with rock icon Joe Jackson’s stellar ensemble in support of his release The Duke, a collection of interpretations of Duke Ellington’s work.  Her 2014 release of Southern Comfort coincided with another international tour.

For Regina Carter, the violin isn’t merely an improvisational vehicle. It’s a passport to unexpected realms, a Rosetta stone that unlocks the door to a myriad of cultures and worlds.