Pictures Under the Palms at Brookfield Place’s Winter Garden 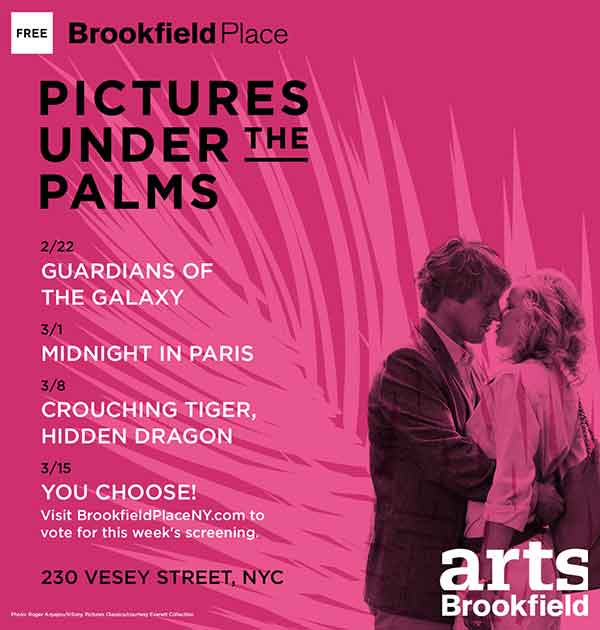 Join them every Wednesday through March 15 for Pictures Under the Palms, a new indoor film series in our Winter Garden oasis. Enjoy free popcorn, comfy seats, and a pre-show DJ set at 5:30 PM, followed by a 7:00 pm screening.

Don’t forget, the March 15 screening is your choice! Vote for your film selection at BrookfieldPlaceNY.com.

February 22 | Guardians of the Galaxy

A group of intergalactic criminals are forced to work together to stop a fanatical warrior from taking control of the universe. Starring Chris Pratt, Vin Diesel, and Bradley Cooper.

While on a trip to Paris with his fiancée’s family, a nostalgic screenwriter finds himself mysteriously going back to the 1920s everyday at midnight. Starring Owen Wilson and Rachel McAdams.

Two warriors in pursuit of a stolen sword and a notorious fugitive are led to an impetuous, physically skilled, adolescent nobleman’s daughter, who is at a crossroads in her life. Starring Yun-Fat Chow, Michelle Yeoh, and Ziyi Zhang.

DJ set by Ben The Beyonder

VOTE for your favorite film to be screened:

A pair of young lovers flee their New England town, which causes a local search party to fan out to find them. Starring Bruce Willis, Jared Gilman and Kara Hayward.

O Brother, Where Art Thou

In the deep south during the 1930s, three escaped convicts search for hidden treasure while a relentless lawman pursues them. Starring George Clooney, John Turturro, and Tim Blake Nelson