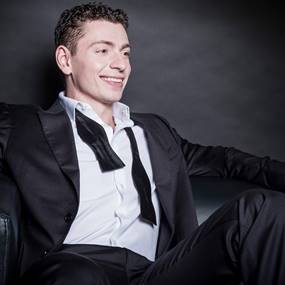 Concert Artists Guild announces that pianist Dominic Cheli, Co-First Prize Winner of the 2017 CAG Competition, will give his Weill Recital Hall debut on Tuesday, March 12 at 7:30pm. Dominic will perform works by Liszt, Scriabin, Brahms, Carl Vine, and the world premiere of Softly her tower crumbled in the sweet silent sun by David Hertzberg—a co-commission by the BMI Foundation and CAG.

Scriabin: Fantasie in B minor, Op. 28

David Hertzberg: Softly her tower crumbled in the sweet silent sun
(World premiere – a co-commission by the BMI Foundation and CAG)

Applauded by MusicWeb International for his “splendid playing…great skill and technical prowess,” St. Louis native Dominic Cheli‘s career is rapidly advancing. In addition to winning the CAG Competition in 2017, he was named a winner of the Music Academy of the West Concerto Competition and released his debut CD on the Naxos label, featuring the music of Muzio Clementi. Highlights of his 2018–19 season include performances at the Mostly Mozart Festival and Ravinia Festival, in addition to his Weill Recital Hall debut with CAG. Dominic made his Disney Hall concerto debut in Los Angeles last October with the Colburn Orchestra, led by Valery Gergiev. Additional featured concerto engagements include the Columbus Symphony and the Princeton Symphony, both under the baton of Rossen Milanov.