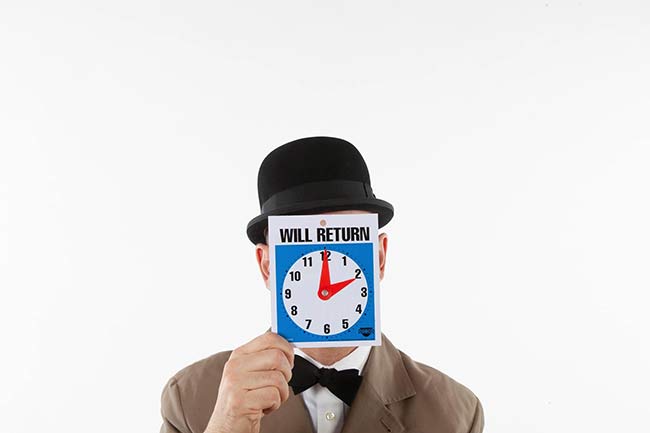 Parallel Exit presents the World Premiere of THE ARTIST WILL BE WITH YOU IN A MOMENT from March 7-29, 2019 at the Jeffrey and Paula Gural Theatre at the A.R.T./New York Theatres, 502 W. 53rd Street, NYC. Performances: Tue-Sat at 8pm, Sat and Sun at 2pm, with additional shows on Sun 3/8 and Mon 3/9 at 8pm (opening night). No matinee on Sat 3/8. Tickets are $30 and are available at https://theartist.brownpapertickets.com/. For ages 10+.

Three-time Drama Desk nominee Parallel Exit returns to New York City with THE ARTIST WILL BE WITH YOU IN A MOMENT – an immersive audience experience featuring Joel Jeske in a solo comic performance as an artist, performer, and clown.A creative force who “can get laughs simply by breathing” (The New York Times), Jeske invites audiences to participate in a multimedia performance and visual art installation with himself as the character, creator, and subject. The production offers Jeske’s signature treatment of art, physical comedy, and audience interaction in a work that subversively asks us what we choose to value and why.

Joel Jeske is a three-time Drama Desk nominated performer, writer, teacher, and director.  He is the Associate Artistic Director for the physical theatre company Parallel Exit where he created and starred in Parallel Exit’s Off-Broadway hits THIS WAY THAT WAY, CUT TO THE CHASE, ROOM 17B, and   EVERYBODY GETS CAKE! Internationally, Joel starred at the Apollo Variete in Dusseldorf, Germany, the Festival Der Traume in Innsbruck, Austria, the COS Festival in Reus, Spain, and the AEMI International Clown Festival in Shanghai and Hangzhou, China. As writer/performer, Joel, along with Parallel Exit, toured Germany for two years performing their slapstick vaudeville EXIT! for the GOP Variete Theaters and Cabarets. As a clown, Joel starred in and created clown acts for Ringling Bros. & Barnum and Bailey Circus, Cirque Du Soleil, and The Big Apple Circus’ The Grand Tour and 40th Anniversary. He recently traveled under the sea as the physical comedy consultant for SPONGEBOB SQUAREPANTS: The Broadway Musical.
www.joeljeske.com

Parallel Exit is a three-time Drama Desk nominee for Unique Theatrical Experience, dedicated to creating original works of physical theatre. New York City productions include EVERYBODY GETS CAKE!, ROOM 17B, CUT TO THE CHASE, and THIS WAY THAT WAY (all at 59E59 Theaters), TIME STEP (New Victory Theater), and EXIT STAGE LEFT (Lincoln Center Institute). Led by Artistic Director Mark Lonergan since its initial informal launch in 1997 with the production of WHITE/NOISE/JUMP (“Best in the Fringe Festival – Excellence in Theatre,” New York International Fringe Festival), the company engages in extensive artistic programming, artist capacity building, and youth education initiatives, throughout New York City’s five boroughs, across the United States, and in countries around the world. Parallel Exit creates compelling stories that are often family-friendly, cultivating art that speaks to a culturally boundless audience of any age. Productions have received both local and international praise for their inventiveness, energy, and originality, with presentations at the Edinburgh Fringe Festival in the UK (winning a Spirit of the Fringe Award); and physical theatre festivals in Poland, Spain, Austria, and Japan. Following an extended 2014-2015 German tour in partnership with GOP Variety Arts Theatre Circuit, Parallel Exit served as the powerhouse behind Big Apple Circus’ critically-acclaimed The Grand Tour (2015), marking the beginning of a new chapter that radiates with excitement. www.parallelexit.com