At the New York Society for Ethical Culture

Panel: Anti-Science and the Crisis of Contemporary Democracy

The following comes courtesy of their newsletter: 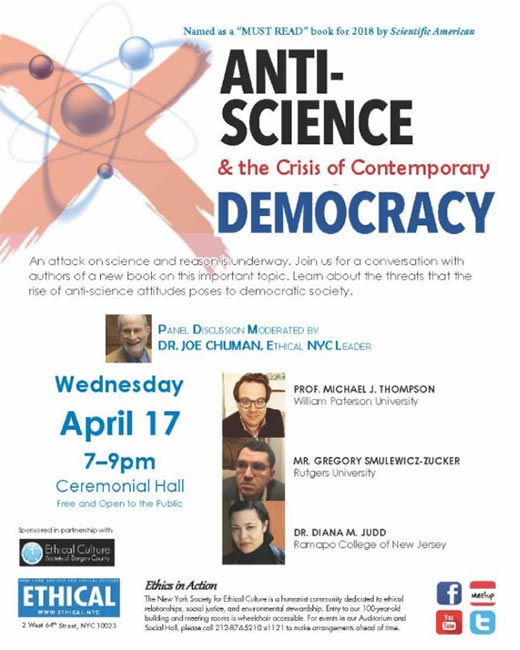 An attack on science and reason is underway in modern societies. Join us for a conversation with authors of a new book on this important topic, Anti-Science and the Assault on Democracy: Defending Reason in a Free Society. Learn about the threats that the rise of anti-science attitudes poses to democratic society.

Defending the role that science must play in democratic society–science defined not just in terms of technology but as a way of approaching problems and viewing the world. In this collection of original essays, experts in political science, the hard sciences, philosophy, history, and other disciplines examine contemporary anti-science trends, and make a strong case that respect for science is essential for a healthy democracy.

Books will be available for purchase!

More from the publisher about Anti-Science and the Assault on Democracy:

The editors note that a contradiction lies at the heart of modern society. On the one hand, we inhabit a world increasingly dominated by science and technology. On the other, opposition to science is prevalent in many forms–from arguments against the teaching of evolution and the denial of climate change to the promotion of alternative medicine and outlandish claims about the effects of vaccinations. Adding to this grass-roots hostility toward science are academics espousing postmodern relativism, which equates the methods of science with regimes of “power-knowledge.”

While these cultural trends are sometimes marketed in the name of “democratic pluralism,” the contributors contend that such views are actually destructive of a broader culture appropriate for a democratic society. This is especially true when facts are degraded as “fake news” and scientists are dismissed as elitists. Rather than enhancing the capacity for rational debate and critical discourse, the authors view such anti-science stances on either the right or the left as a return to premodern forms of subservience to authority and an unwillingness to submit beliefs to rational scrutiny.

Beyond critiquing attitudes hostile to science, the essays in this collection put forward a positive vision for how we might better articulate the relation between science and democracy and the benefits that accrue from cultivating this relationship.