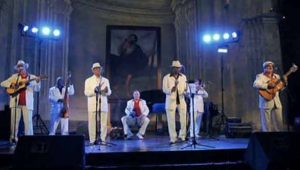 Al Rojo Vivo!
Since 1927, the legendary Septeto Nacional de Cuba
and the longest running charanga band outside of Cuba…

Lehman Center for the Performing Arts makes way for Septeto Nacional de Cuba, icons of son, the bedrock of Cuba’s national music tradition. The seminal septet was formed in 1927 by the first son superstar, Afro-Cuban vocalist and bassist Ignacio Piñeiro, who transformed the genre from its rural roots to a more urbane dance sensation. This rhythmic blend of African and Latin music would evolve into salsa, the mambo and Latin jazz. Piñeiro’s legacy lives on in Septeto’s modern-day musical arrangements, as you’ll hear when they hit the Lehman PAC! They’ll be joined by New York’s own Orquesta Broadway, the longest running charanga band outside of the island of Cuba.

Septeto Nacional de Cuba Ignacio Piñeiro are paragon interpreters of son, Cuba’s national music gender par excellence. Decades before the Buena Vista Social Club, the septet performed the compositions of its namesake, transforming them into international standards of the son tradition. Septeto Nacional was formed in 1927 by the first superstar of Cuban son, Ignacio Piñeiro.

The popular Orquesta Broadway has certainly stood the test of time to become not only one of the few New York’s surviving charangas but the longest running charanga band outside of the Cuban island. Fifty years after its foundation and in spite of passing music styles, the always-in-demand Orquesta Broadway still enjoys an enviable position at the forefront of Latin music in the country.