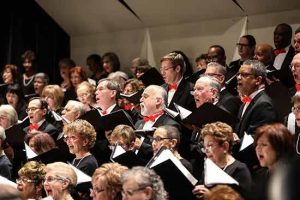 As a hallmark of the vibrant arts community in Queens, the Oratorio Society of Queens will perform with its 125-plus member chorus under the direction of Maestro David Close with featured soloists Jennifer Gliere, soprano, Byron Singleton, tenor, Nathan Bahny, bass-baritone and with OSQ’s orchestra, the Orchestral Arts Ensemble of Queens.

The first half of the program features selections from Handel’s “Messiah.” The second half of the program features Chanukah favorites “Mi Y’Maleil,” “S’vivon” and Maestro’s signature arrangement of “Ma’oz Tsur!” “The Many Moods of Christmas, Suite 2,” a second suite of carols of the season from the incomparable team of Robert Shaw and Robert Russell Bennett is new this season! Thrill to the Latin rhythms of Jose Feliciano’s “Feliz Navidad” in a funky jazz version by Paul Langford. Welcoming the New Year in advance, we all join in the fun as we all clap along to the “Radetsky March” an enduring holiday favorite at every New Year’s Day concert of the Vienna Philharmonic. “O Holy Night” featuring our tenor and soprano soloists backed by the entire chorus brings the concert to its spectacular climax!

Queensborough Performing Arts Center is located in Queensborough Community College at 222-05 56th Avenue, Bayside, NY – on 56th Avenue one block east of Springfield Boulevard in Bayside. Parking is free on the main lot next to the theater, which offers easy-access entry.

DAVID CLOSE is Artistic Director and Conductor of The Oratorio Society of Queens and The Orchestral Arts Ensemble of Queens. He is also Director of Music and Organist of Our Lady Queen of Martyrs and its Sacred Music Society and organist of Temple Am Echad in Lynbrook, NY. He is the Artistic Director and Conductor of the Great Neck Choral Society. For many years, he served as conductor and vocal coach of the Queens College Opera Theater and conducted performances of the Singers’ Theater of Westchester, the Manhattan Opera and the New York Lyric Opera and Summer Sings for the New York Choral Society and the Masterwork Chorus of New Jersey. He created Musica Reginae Productions and was a founding member of the Flushing Council on Culture and the Arts. He has conducted in the annual Messiah Sing-in at New York’s Philharmonic Hall and he just recently conducted a New York Choral Society Summer Sing at Symphony Space.

JENNIFER GLIERE, soprano, from Cincinnati, Ohio, has been described as “a sensitive artist who knows how to turn a phrase while giving urgent meaning to the text.” She has appeared in recital and oratorio in Austria, France, Germany, Italy, Russia, Ukraine, and throughout the United States. She has given two recital tours in Mexico, performing in live festivals and events around the country as well as giving masterclasses to several youth choirs and appearing in television and radio studios. Her repertoire runs the gamut from Barbara Strozzi chamber music and cantatas, early Baroque zarzuelas, Handel’s Ode for St. Cecilia’s Day, Bach’s B Minor Mass/Magnificat, and Rossini’s Stabat Mater to Luigi Dallapiccola’s Canti di Prigionia and Poulenc’s Gloria. She was pleased to celebrate Pope Francis’ 2015 visit to the US by singing in his Mass in Madison Square Garden. Equally at home on the concert and operatic stages, Gliere has most recently garnered rave reviews for her portrayal of Violetta in La Traviata; OperaWire noted that she was a “delicate powerhouse… displaying vocal effervescence as good as any champagne.” She has been involved with productions at the Bard Opera Theatre and appearances with Amor Artis and New Opera New York.

BYRON SINGLETON, tenor, is becoming widely known for his “powerful and compelling interpretations” of the romantic tenor repertoire. Said to be possessed of “a brilliant, beautiful tenor voice delivered with generous and unabashedly ardent lyricism”, Mr. Singleton has performed in opera and concert throughout the US. Opera roles include Riccardo in Un Ballo in Maschera, Canio in I, Pagliacci, Rodolfo in La Boheme, Rinuccio in Gianni Schicchi, Nemorino in L’Elisir D’amore, B.F. Pinkerton in Madama Butterfly, Benedict in Beatrice and Benedict, Alfredo in La Traviata, and Tamino in Die Zauberflote, among others. He has been a guest artist in concert with the German Forum at the Hungarian Consulate. Other notable productions include the title role in Alexander the Great with the East Coast Symphony, Paul in Mask in the Mirror a new opera about the life of Paul Dunbar, the first published African-American poet. Most recently he was heard as Calaf in Turandot at the National Opera Center, and his Off-Broadway theatrical debut as the First Guard in Jean Anouihl’s Antigone. He recently made his solo Carnegie Hall debut in a concert featuring the music of Bernstein and Sondheim. He has sung in eleven productions with the chorus at the Metropolitan Opera. In 2009, he was a finalist in the Mario Lanza Tenor Competition.

ORATORIO SOCIETY OF QUEENS was established in 1927 by Flushing folks who loved to sing – it was Queens’ answer to the prestigious Oratorio Society of New York, founded 54 years earlier. Without the acoustics and grandeur of Carnegie Hall, the Oratorio Society of Flushing brought the best of classic choral music across the East River into Queens. As the population of Queens grew and prospered, so did the Oratorio Society of Flushing and in 1985 the Society incorporated as the Oratorio Society of Queens (OSQ), reflecting the expanding participation of voices from neighborhoods beyond Flushing. Today the membership is borough‐wide and includes several Bronx and Nassau County residents. OSQ is the borough’s oldest cultural institution, the oldest performing arts organization, and a charter member of both the Queens Council on the Arts and the Flushing Council on Culture and the Arts. The group has sung at Lincoln Center and in churches, synagogues, hospitals, community centers, hotels and parks. Throughout its history, OSQ has been non‐sectarian and to this day welcomes adult members of all ages, faiths, and ethnicities. The roster of members invariably includes active and retired educators, lawyers, health professionals, Wall Street executives, engineers, homemakers, secretaries, writers, librarians, actors, artists, moms, dads, and students ‐ in short, people from all walks of New York City life.