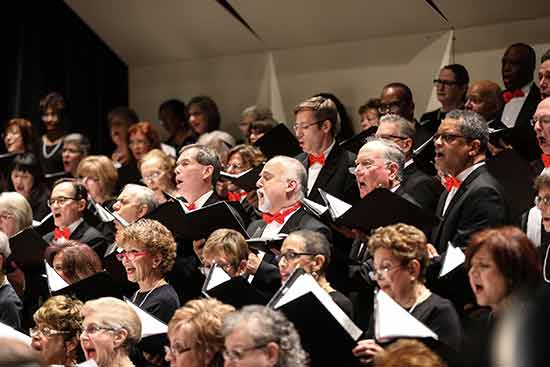 The Oratorio Society of Queens (OSQ) performs Leonard Bernstein’s Chichester Psalms, selections from West Side Story, “Make Our Garden Grow” the finale from Bernstein’s Candide, as well as Americana favorites on Sunday, May, 20 2018 at 4:00 pm in the Queensborough Performing Arts Center (QPAC), Bayside, New York.

As a hallmark of the vibrant arts community in Queens, OSQ will perform with its 125-plus member chorus under the direction of Maestro David Close featuring soloists and guest artist Jerry Korobow with OSQ’s orchestra, the Orchestral Arts Ensemble of Queens.

This year 2018, marks the 100th birthday of American composer, conductor and pianist, Leonard Bernstein, one of the most gifted and brilliant musicians ever to have graced the American musical scene. The Chichester Psalms was commissioned by the Southern Cathedrals Festival at Chichester Cathedral and composed in 1965, is a setting of psalms celebrating joy, offering reassurance in a troubled world and underlining the beautiful theme of humanity living together in unity. The work’s rhythmic verve and melodic beauty are Bernstein at his best…truly music for our time!

The West Side Story Choral Suite offers a sampling of Bernstein’s most beloved music from his enduringly popular musical of 1957 including “Tonight,” “Maria,” and “Somewhere.” The musical, based on Shakespeare’s “Romeo and Juliet” updates the star-crossed lovers’ lives to the realities of Manhattan’s west side during the 1950s.

Voltaire, an 18th century French philosopher who wrote the book on which Bernstein’s opera, Candide, is based, asks us to “Make our garden grow.” Growing our garden is a metaphor for the flowering of mankind itself, and we celebrate just that with this glorious song.

Selections from the best of the American Choral Experience are featured with beloved African-American Spirituals including “Ride the Chariot” and “Swing Low, Sweet Chariot.” The African-American experience of slavery is reflected in the texts of the spirituals offering the hope of deliverance from bondage through the use of religious symbols. Heaven becomes a metaphor for release from slavery and ‘riding the chariot in the morning’ might mean escape at dawn.

Jerry Korobow, singer, composer and guitarist, is featured playing his original compositions including his very popular “Grandma Song.” An engaging and humorous raconteur, he will give you entertaining insights into how life’s experiences impact a composer’s work and result in the creation of a new song!

Queensborough Performing Arts Center is located in Queensborough Community College at 222-05 56th Avenue, Bayside, NY. Parking is free on the main lot next to the theater, which offers easy-access entry.

David Close, Conductor, is the Artistic Director and Conductor of the Oratorio Society of Queens and its orchestra, the Orchestral Arts Ensemble of Queens. He is also the Director of Music and Organist of Our Lady Queen of Martyrs (Forest Hills) and its Sacred Music Society and organist of Temple Am Echad in Lynbrook, NY. He is also the Artistic Director and Conductor of the Great Neck Choral Society. For many years, he served as conductor and vocal coach of the Queens College Opera Theater and conducted performances of the Singers’ Theater of Westchester, the Manhattan Opera, the New York Lyric Opera, and Summer Sings for the New York Choral Society and the Masterwork Chorus of New Jersey. He founded and was the Executive & Artistic Director of Musica Reginae Productions and was a founding member of the Flushing Council on Culture and the Arts. He has conducted in the annual Messiah Sing-in at New York’s Philharmonic Hall and has recently conducting a New York Choral Society Summer Sing at Symphony Space.

Jerry Korobow, guest artist, is the Cantor of Temple Beth Sholom in Flushing. He previously served as the Cantor of Temple Am Echad in Lynbrook, NY for 12 years. As part of his cantorial work, he created and produced “Jazz Shabbat,” “Peter, Paul & Mary Shabbat,” “Rock Shabbat,” “Gospel Shabbat,” and “Klezmer Shabbat” services. He also spent years entertaining children as “Jeremy Kidd.” Jerry has many years of experience as a professional performing, touring, and recording singer/instrumentalist, and actor. Having worked as a social worker, public school music teacher, and still working as a full-time practicing attorney, he has also brought a very unusual and interesting background to the world of Jewish cantorial music. Always seeking new and exciting musical programs, opportunities and challenges, along the way, Jerry constantly encourages musical participation, whether that involves a classroom of children, a congregation, or an audience. He lives with his wife Zo-An in Roslyn Heights, NY, and has two grown, married daughters and four grandchildren.

The mission of the Oratorio Society of Queens is to engage, educate and uplift the Queens community by presenting musical programs that span the repertoire from great choral masterpieces to popular all-time favorites. OSQ was founded in 1927 and was originally established as a non-sectarian, grassroots, independent community chorus to make music by and for the community. For over 90 years, our mission continues to be fulfilled as OSQ regularly produces concerts that increase the appreciation of Queens’ audiences for choral music. As OSQ continues to broaden its audience, it remains strongly rooted in that founding tradition of community service.