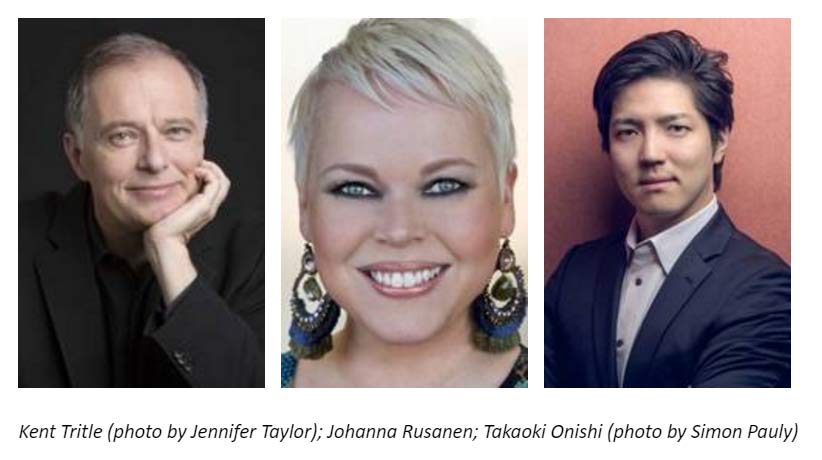 Soprano Johanna Rusanen, in her Carnegie Hall debut, and baritone Takaoki Onishi are the soloists in Kullervo, for which the OSNY will be joined by tenors and basses of the Manhattan School of Music Symphonic Chorus.

“Kullervo is the King Kong of orchestral composition. Its brutality and massive size command fear and respect, yet it is at heart a romantic work.”

“After my residency at the Sibelius Academy in Helsinki in 2016 and my visit to Ainola, the home of Sibelius,” Kent Tritle said, “Kullervo went onto my bucket list. It is a magnificent orchestral work, considered to be Sibelius’s magnum opus, and is a work of great importance not only to the classical music canon, but to the Finnish people in particular. In Kullervo we find Sibelius creating his unique voice.”

For Tickets visit this page here…

Kullervo and its performance history in New York

One of Sibelius’s earliest works (completed in 1892, when the composer was 27), Kullervo is a 70-minute suite of five movements for orchestra, soprano and baritone soloists and men’s chorus that follows the life of Kullervo, one of the most tragic characters in Finnish folk literature as depicted in Finland’s folk epic Kalevala, a work that remained a source of inspiration for Sibelius throughout his career. Kullervo tells the story of a man orphaned by the massacre of his tribe, whose unredeemed, vengeful life leads to his rape of a woman he finds to be his sister – a discovery resulting in both of their suicides.

As Cori Ellison wrote in The New York Times, “Like many Finnish composers before and since, Sibelius felt humbled at the thought of setting the ‘Kalevala’ to music. But he tamed his fears enough to write the symphonic poem ‘Kullervo’ (1892), which put him on the international musical map and, more important, planted the seeds of a national musical language.” Alex Ross wrote in The New Yorker, “The score echoes Brahms, Bruckner, and Tchaikovsky, but it speaks in an unmistakable voice. With its wide-open forms, irregular folk rhythms, misty textures, piercing dissonances, and air of epic mystery, it is scarcely less radical than the music that Debussy and Rimsky-Korsakov were writing in the same period.

The men’s chorus is featured in the third and central movement (“Kullervo and his Sister”) and fifth and final movement (“Death of Kullervo”). As Allan Kozinn wrote in The New York Times, “the real vibrancy is in the choral writing, which has the quality of a detached but spellbinding storyteller.”

According to an essay on the work on the website Sibelius.fi, “Kullervo is … the King Kong of orchestral composition. Its brutality and massive size command fear and respect, yet it is at heart a romantic work. After the completion of Kullervo Sibelius could proceed in only one direction: towards greater concentration and a more consistent symphonic form. The critic Karl Flodin was right. Kullervo was not the start of a road; it was the end. Never again would Sibelius create anything as brazenly megalomaniac.”

Kullervo did not have its U.S. and New York premieres until 1979, when the Milwaukee Symphony, conducted by Kenneth Schermerhorn, performed it at home and at Carnegie Hall. The work has had roughly half a dozen performances in New York since then, including those by the Brooklyn Philharmonic led by Robert Spano, Helsinki Philharmonic led by Leif Segerstam, London Symphony Orchestra led by Sir Colin Davis, and, most recently, the Minnesota Orchestra led by Osmo Vänskä in 2010.

Finnish dramatic soprano Johanna Rusanen, who makes her Carnegie Hall debut with this program, has made something of a signature of the part of the sister in Kullervo, recent performances having included those in Tokyo, at the Prague Spring and Grant Park (Chicago) festivals, and, in 2015, at the BBC Proms, at which she garnered praise for a performance with the BBC Symphony Orchestra and Chorus conducted by Sakari Oramo.

This performance of Kullervo is made possible by a major grant from the Jane and Aatos Erkko Foundation, Helsinki, and also by assistance from the Finnish Music Foundation (MES), Helsinki.

Berlioz’s “La mort d’Ophélie” for women’s chorus and orchestra is a movement from Tristia, a trio of choral works. Describing Ophelia’s drowning from Act IV of Shakespeare’s Hamlet, the work was originally written for solo voice and piano in 1842; Berlioz revised it for expanded forces in 1848. “Sirènes” is the third movement of Debussy’s popular three-part orchestral work Nocturnes (1899), depicting the sea at night and the wordless song of the Sirens.

On April 6, the Oratorio Society will hold the finals of its annual Lyndon Woodside Oratorio-Solo Competition, which remains the only major competition to focus exclusively on oratorio singing, in Weill Recital Hall at Carnegie Hall. Each of the eight finalists will perform two works in concert before a panel of distinguished judges, and prizes are announced immediately after the judges’ deliberations.

Johanna Rusanen has evolved into one of the most interesting Finnish dramatic sopranos of her generation. After completing two years at the young artist program at Deutsche Oper Berlin, she has performed heroines of the German, Italian, and Finnish opera literature including Venus (Tannhäuser), Turandot, Tosca, Leonora (La forza del destino), and Ortrud (Lohengrin) with companies including Tampere Opera, Finnish National Opera, Teatro Regio in Turin, and Teatro Municipale in Sao Paulo, and at the Savolinna Opera Festival. In spring 2016  Rusanen celebrated her debut as Isolde at the Finnish National Opera, the same opera house that will see her first Brünnhilde in 2019 in a new production of Wagner’s Ring cycle conducted by Esa-Pekka Salonen. She was featured in the recording of Penderecki’s Polish Requiem conducted by the composer that won a Grammy in 2017. http://www.opera-connection.com/artists/johanna-rusanen/

A native of Tokyo, Japan, baritone Takaoki Onishi is quickly gaining recognition as one of the most talented singers of his generation. In just one year, he won the Top Prize in Gerda Lissner International Vocal Competition, and the First Prize in both the Opera Index, Inc. Vocal Competition and the Licia Albanese-Puccini International Vocal Competition. He also received a prize in the 2013 Loren L. Zachary Competition. Most recently, he was named First Prize winner in the 2015 Giulio Gari Competition. In the 2015-16 season, Mr. Onishi joined the prestigious Ryan Opera Center of the Lyric Opera of Chicago. He made his debut with the company creating the role of Father Arguedas, in the world premiere of the opera Bel Canto by Jimmy López. He performed Carmina burana with the Oratorio Society of New York in 2015. www.takaokionishi.com

OSNY Music Director since the 2005-06 season, Kent Tritle is also Music Director of the professional chorus Musica Sacra, and Director of Cathedral Music and Organist at the Cathedral of St. John the Divine where he directs the concert series Great Music in a Great Space. Tritle is Director of Choral Activities at the Manhattan School of Music and a member of the graduate faculty of the Juilliard School. An acclaimed organ virtuoso, he is the organist of the New York Philharmonic and the American Symphony Orchestra. www.kenttritle.com

David Rosenmeyer is celebrating his tenth season as the Oratorio Society’s Associate Conductor and in recent years has conducted the Society’s Carnegie Hall performances of Britten’s Te Deum in C (2010), and the chamber orchestra in Britten’s War Requiem (2013). He is also Music Director of the Fairfield County Chorale, which he recently led in a performance of Beethoven’s Ninth with the New Haven Symphony Orchestra. In addition, he serves on the Mannes conducting staff and as a conductor and vocal coach with the International Vocal Arts Institute in Tel Aviv. www.davidrosenmeyer.com

Since its founding in 1873, the Oratorio Society of New York, New York’s 200-voice avocational chorus, has become the city’s standard for grand choral performance, having performed world, U.S., and New York premieres of works as diverse as Brahms’s Ein deutsches Requiem (1877), Berlioz’s Roméo et Juliette (1882), a full-concert production of Wagner’s Parsifal at the Metropolitan Opera House (1886), Britten’s The World of the Spirit (1998), Filas’s Song of Solomon (2012), Moravec’s Blizzard Voices (2013), and, in 2018, the Paul Moravec/Mark Campbell oratorio Sanctuary Road, and Behzad Ranjbaran’s We Are One in their world premiere performances. On its 100th anniversary the Oratorio Society received the Handel Medallion, New York City’s highest cultural award, in recognition of its contributions. www.oratoriosocietyofny.org