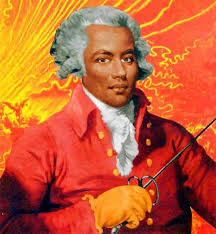 NEW YORK, NY – Opera Company of Brooklyn (OCB) celebrates Black Awareness Month with a special presentation featuring the work of Afro-French composer and conductor, Joseph de Bologne, the Chevalier de Saint-George. Active in the Royal Courts of eighteenth century France, Saint-George was passed up as the leader of the Paris Opera for reasons of race discrimination, however remained active in aristocratic circles, including the court of Marie-Antoinette at Versailles. Saint-George’s other passion, fencing, gave him an audience with the British Royal Family. It was during his time in the UK that he began to notice the presence of anti-slavery movements. Saint-Georges achieved the rank of Captain during the French Revolution, continuing to entertain his compatriots with the composition of his opera ‘Guillaume-Tout-Coeur ou les Amis de village (William-All-Heart or The Village Friends). With his legacy overshadowed by that of Voltaire and Napoleon, we look forward to raising awareness on this key figure in not just early anti-slavery movements, but his imminent role in the musical tapestry of France. OCB will present a musical program of his work at Abyssinian Baptist Church on Friday, February 28th of 2014 at 7pm.

Recitative and Aria: Scena from Ernestine

OCB’s passion is to bring opera out of the theatre and into the lives of all. Our purpose is to showcase impressive voices and the best upcoming artists in an intimate, dynamic setting, with minimal costuming and music. Our connection makes opera more accessible with performing experiences in fun settings.