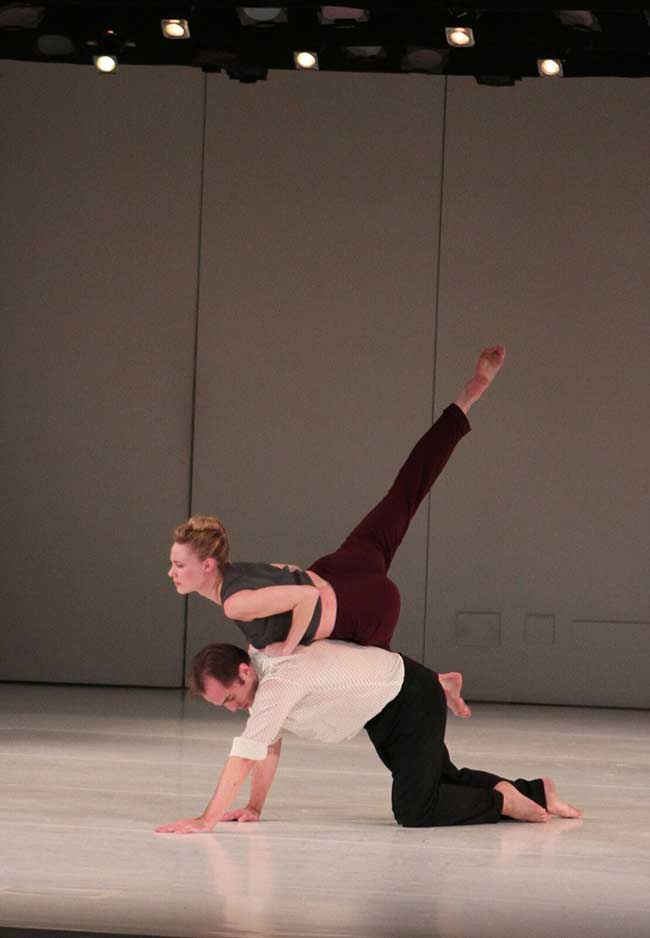 Works & Process is pleased to announce two of its recent commissions, Battleground by Ryan McNamara and NEW BODIES by Jodi Melnick, will be available for touring in 2018 and onwards. One of Sixty-Five Thousand Gestures — a solo Melnick co-choreographed with Trisha Brown — will be added to the NEW BODIES bill. To inaugurate this touring initiative, Works & Process will present encore performances of these two programs at the Guggenheim in January 2018.

Choreographer Jodi Melnick designs intricate movement to explore the exquisite nature and dynamic relationships between human beings. She uses the profound expression of the dancing body and lucid performing instincts to drive the creative process. The work is transformed through the phenomenon of dancing; it comes into being through the dancing of it. The body, these New Bodies, are the works aesthetic material. Melnick is part of the first group of Doris Duke Impact Award recipients, a 2016/17 LMCC Extended Life grantee, a 2012 Guggenheim Fellow, the recipient of the Jerome Robbins New Essential Works Grant (2010-2011) and the Foundation for Contemporary Arts Grant (2011), and has been honored with two Bessie Awards for sustained achievement in dance (2001 and 2008). Melnick’s work has been presented both nationally and internationally, at BAM’s Fisher theater as part of the Next Wave Festival, at City Center’s Fall for Dance, The Joyce Theater, New York Live Arts (NYLA), The Kitchen, La Mama, Jacob’s Pillow, American Dance Festival, DanceBox in Kansai, Japan, the Dublin Dance Festival, Belfast, Ireland, St. Petersburg and Moscow, Russia, and Tallinn, Estonia. In 2012 Melnick collaborated with Trisha Brown, creating and performing  the solo One of Sixty Five Thousand Gestures. Melnick has also had the great privilege of working with choreographers/ artists including:Twyla Tharp (1990-1994, 2009), Mikhail Baryshnikov (2005-2008), John Jasperse, Donna Uchizono, Yoshiko Chuma, Liz Roche, Burt Barr, Charles Atlas,Irene Hultman, Dennis O’Connor, Lance Gries, David Neumann, Beth Gill, and Jillian Pena. She continues to perform and collaborate with Sara Rudner, Vicky Shick, Susan Rethorst, Jon Kinzel, Rashaun Mitchell, and Kyle Bukhari. Currently, she is an adjunct professor of dance at Sarah Lawrence College, Barnard College at Columbia University, New York University in the Experimental Theater Wing, and The Trevor Day School.

Sara Mearns, a principal with New York City Ballet, began her training in Columbia, South Carolina. Mearns entered the School of American Ballet full time in 2001 and became an apprentice with New York City Ballet in 2003. The following year, she joined the company as a corps de ballet member, becoming soloist in 2006, then reaching principal in 2008. Mearns is known for her roles in Swan Lake; Balanchine’s Symphony in C, Diamonds, Serenade, Walpurgisnacht, Mozartiana, Chaconne, Concerto Barroco; Robbins’ Dances at a Gathering, The Four Seasons, and In G Major. She has worked with and originated roles in pieces by world renown choreographers such as Alexei Ratmansky, Christopher Wheeldon, Peter Martins, Justin Peck, Karole Armitage, Benjamin Millipied, Liam Scarlett, Richard Tanner, Susan Stroman, and Emmy Award winning choreographer Joshua Bergasse. She has commissioned works for the Fall for Dance Festivals at New York City Center in 2013 and 2014. She also starred in a full night production, “A Dancers Dream”, at the New York Philharmonic. She is a board member of the Dizzy Feet Foundation founded by Nigel Lythgoe and Adam Shankman and on the advisory board of Dance NYC. Mearns was featured in the Aol Series, “City.Ballet”, produced by Sarah Jessica Parker. Sara also serves as a Brand Ambassador for the world wide beauty and fragrance brand, Guerlain. As an ambassador, Sara tries new products, promotes the product launches, events and serves as an honest voice of the Guerlain brand. Sara has guest starred in the Tony nominated Broadway revival, On The Town. Sara also worked on a video project to promote a new laptop product for Hewlett Packard. In 2014, Sara Mearns was signed by Cole Haan to collaborate on a capsule collection of footwear inspired by the studio-to-street lifestyle of a City Ballet dancer. The inaugural collection launched in October 2014 in Cole Haan stores nationwide and on www.colehaan.com and has continued with “The Art of Elegant Innovation”.

Jared Angle was born in Altoona, Pennsylvania where he began his dance training at the age of six at the Allegheny Ballet Academy. He entered the School of American Ballet (official school of New York City Ballet) in 1996, where he was a recipient of a Rudolf Nureyev Foundation Scholarship. Mr. Angle joined the New York City Ballet (NYCB) in 1998. He was awarded a Princess Grace Foundation USA Dance Fellowship in 2001, and was promoted to Principal Dancer with the company in 2005. Since joining NYCB, Mr. Angle has performed in many works by George Balanchine, Jerome Robbins, Peter Martins, and originated roles in works by Martins, Twyla Tharp, and Benjamin Millepied among others.  Mr Angle has toured extensively with the NYCB, been a guest artist with Rome Opera Ballet, Singapore Ballet, the Vail International Dance Festival, the International Ballet Festival in Havana, Cuba, and as a part of The San Francisco Ballet’s 75th Anniversary Season. He has previously appeared with Works & Process at the Guggenheim Museums in New York and Bilbao, as both dancer and moderator.

Taylor Stanley was born in Philadelphia, Pennsylvania and began his dance training at the age of three at The Rock School in Pennsylvania. He attended summer programs at Miami City Ballet in 2006 and 2007 and at the School of American Ballet, the official school of New York City Ballet, during the summer of 2008 before enrolling full-time at SAB in the fall of that same year. In September 2009, Mr. Stanley became an apprentice with NYCB, and joined the Company as a member of the corps de ballet in September 2010. He was promoted to soloist in February 2013 and to principal dancer in May 2016.

Described byThe New York Times as “an exceptional opportunity to understand something of the creative process,” for over 33 years and in over 500 productions, New Yorkers have been able to see, hear, and meet the most acclaimed artists in the world, in an intimate setting unlike any other. Works & Process, the performing arts series at the Guggenheim, has championed new works and offered audiences unprecedented access to generations of leading creators and performers. Most performances take place in the Guggenheim’s intimate Frank Lloyd Wright-designed 285-seat Peter B. Lewis Theater. In 2017, Works & Process established a new residency and commissioning program, inviting artists to create new works, made in and for the iconic Guggenheim rotunda. worksandprocess.org.