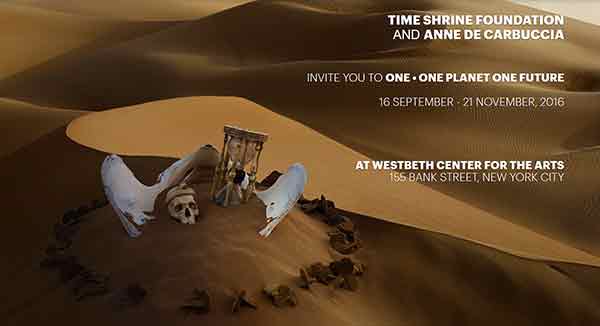 ONE • One Planet One Future

Anne de Carbuccia’s photographs make ingenious use of vanitas art, a tradition that dates back to the sixteenth and seventeenth centuries, which features the skull and the hourglass as symbols of vanity and time. Using these objects, organic elements, and found objects she creates an installation—a shrine—in symbolically significant environments to draw attention to that particular location or to honor its beauty. This bold reimagining of classical still life composition might be called “live life” imagery.

The images were taken on expeditions to which de Carbuccia traveled with a very small crew and an instinctive sense of purpose. Her photographs are both an homage to their subjects—water, forests, endangered species—and an exposé on the ruinous effects of pollution and war. They record what is fast disappearing for future generations while also serving as a plea to reimagine a new world.

ONE • One Planet One Future harnesses the universal language of art to raise awareness and inspire individual action. Through her photographs, de Carbuccia aims to draw attention to the current environmental crisis and to move people to change the behaviors and habits that contribute to it.