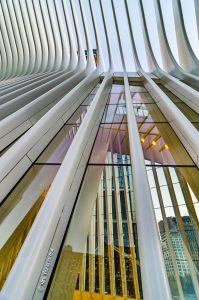 During the month of December, Westfield World Trade Center will become New York’s newest destination to experience the wonder and excitement of the holiday season.

Beginning on Thursday, December 1st and then continuing until the end of the year, the destination will be set aglow between 3:30pm and 11:30pm each daywith an artistic holiday light show projected onto the walls of iconic, Santiago Calatrava-designed Oculus.

An innovative and modern reimagining of traditional holiday lights, Oculus Holiday Lights at Westfield World Trade Center is the product of a partnership between Westfield and trailblazing local New York visual artists Susan Holland and Bentley Meeker—who have won widespread accolades for creating captivating art installations, including site specific pieces for President and Mrs. Obama at the 2015 US-China State Dinner, the 2016 US-Nordic State Dinner, and also for the Halloween festivities held at the White House just last month.

Free and open to the public, this holiday event is designed to inspire a heightened awareness of how light shapes our daily existence in powerful and sometimes unexpected ways.  The juxtaposition of multiple light sources creates a unique spectral effect that simultaneously deceives and delights each viewer’s eyes and brings the wonder of the season to each person’s heart and mind.

“Oculus Holiday Lights at Westfield World Trade Center is a contemporary take on a festive tradition,” said Susan Holland.  “Using advanced technology with classic motifs, we have developed a visual conversation between the dynamic architectural tines of the Oculus and playful motion graphics.”

“From the very first moment I saw the Oculus on a hard hat tour, I thought it was simply one of the most incredible spaces and places I had ever seen,” said Bentley Meeker.  “To have been asked to create something magical here is truly one of the greatest honors of my entire career.”