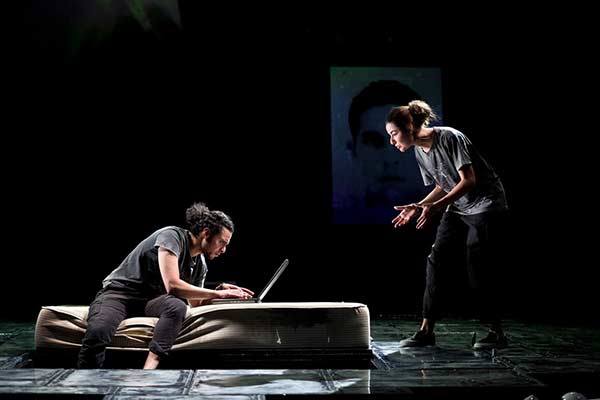 Presentation of Stonewall 50, NYU Skirball’s year-long commemoration of the 50th Anniversary of the historic Stonewall Uprising

The National Theatre of Scotland’s acclaimed production of  Adam will have its North American premiere at NYU Skirball, February 14 – 16 at 7:30 pm.  Adam is the remarkable, true story of a young trans man and his journey to reconciliation – with himself, those closest to him, and the world as he knows it. It is performed by the real-life Adam Kashmiry with Rehanna MacDonald and features a virtual choir of trans and non-binary singers from across the world, who are projected onto the stage.

Adam is both a bold exploration of the experience of a young transgender person and an ambitious experiment with theatrical form, blending storytelling, classical composition and mass digital elements from participants from around the globe.

Adam is part of Stonewall 50, NYU Skirball’s year-long commemoration of the 50th Anniversary of the historic Stonewall Uprising, which took place only blocks from the NYU Campus.  The celebration will feature special events, marches, panels and parties.

Adam Kashmiry was born in 1992 in Alexandria, Egypt, into a girl’s body but always sensing that he was really a boy. In a deeply conservative society, where men and women had to conform to strict codes of gender-stereotyped behavior, Adam had no words to describe this feeling. Though homosexuality isn’t specifically outlawed in Egypt, LGBT people are frequently convicted under the country’s debauchery laws, where hundreds of LGBT people have been arrested and trans people are frequently harassed and physically abused. At age 14 he gave himself his current name, Adam, but only in secret. In the face of harassment, and social pressure, Adam eventually turned to drink and drugs, and was forced to leave home at the age of 19, becoming homeless.

At one point, sitting alone in his room, he went online and typed: “Can the soul of a boy be trapped in the body of a girl?” What he found was a wealth of supportive voices and material, a whole world of explanation for what he, in fact, might be .It was the catalyst to begin the epic journey for the right to change his body, to the boy he knows himself to be.

The National Theatre of Scotland is dedicated to playing the great stages, arts centers, village halls, schools and site-specific locations of Scotland, the U.K. and internationally. As well as creating groundbreaking productions and working with the most talented theater-makers, the company produces significant community engagement projects, innovates digitally and works constantly to develop new talent. Founded in 2006, the company has become a globally significant theatrical player, with an extensive repertoire of award-winning work. nationaltheatrescotland.com

NYU Skirball, located in the heart of Greenwich Village, is one of New York City’s major presenters of international work, and has been the premier venue for cultural and performing arts events in lower Manhattan since 2003. The 800-seat theater, led by Director Jay Wegman, provides a home for internationally renowned artists, innovators and thinkers. NYU Skirball hosts over 300 events annually, from re-inventions of the classics to cutting-edge premieres, in genres ranging from dance, theater and performance arts to comedy, music and film.

Jay Wegman is the Director of NYU Skirball Center for the Performing Arts. Prior to Skirball, he served as Director of the Abrons Art Center for ten years. During his tenure, Abrons was awarded various honors, including a 2014 OBIE Award for Innovative Excellence and a 2015 Bessie Award for Best Production. He was also a Fellow at the John F. Kennedy Center for the Performing Arts in Washington, D.C., and for over a decade served as the first Canon for Liturgy and the Arts at the Cathedral of St. John the Divine. He is the recipient of the 2015 FRANKY award for “making a long-term, extraordinary impact on contemporary theatre and performance in New York City.” While not a performer, he has appeared in Brian Roger’s film “Screamers” (2018), Sibyl Kempson’s “12 Shouts to the Ten Forgotten Heavens” (2017), and “Romper Room” (1969). Jay is a graduate of Yale University. www.nyuskirball.org.

Programs, artists and ticket prices are subject to change.