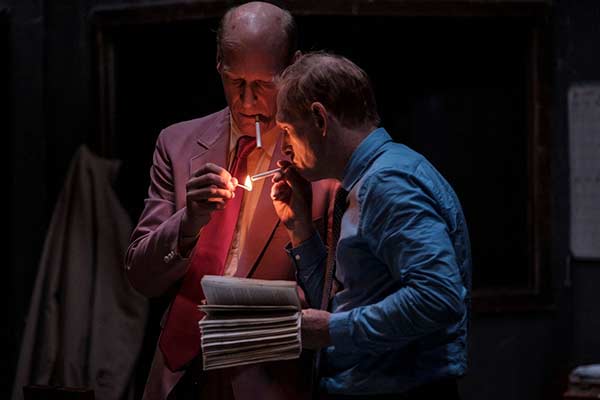 Based on F. Scott Fitzgerald’s “The Great Gatsby”

“The most remarkable achievement in theater not only of this year but also of this decade.”  –  Brantley, N.Y. Times

Gatz was last seen in New York in 2012.  This acclaimed play, featuring a cast of thirteen, is a theatrical tour de force — not just a retelling of the Gatsby story but a thoroughly entertaining dramatization of Fitzgerald’s American masterpiece, word for word.

Gatz, created by multi award-winning ensemble Elevator Repair Service, is directed by John Collins and features Scott Shepherd (X-Men: Dark Phoenix, Bridge of Spies), who won an Obie for his performance in Gatz.

One morning in the shabby office of a mysterious small business, an employee (Scott Shepherd) finds a copy of The Great Gatsby in the clutter on his desk. He starts to read it out loud and doesn’t stop. At first his coworkers hardly notice. But after a series of strange coincidences, it’s no longer clear whether he’s reading the book, or the book is transforming him into its narrator. Trailer: vimeo.com/36785651

Gatz has enjoyed over twenty-five engagements world-wide since its premiere in 2006; in September it was seen at NYU Abu Dhabi Arts Center, and coming up in February it will play Princeton’s McCarter Theatre Center in February and the Perth Festival in Australia in March.

Elevator Repair Service, based in NYC, has been making original theater since 1991. Under the direction of Artistic Director John Collins, ERS has achieved national and international recognition with its extensive body of work and has influenced a generation of theater-makers. The company’s performances have been presented in Europe, Australia, Asia, South America and across the United States, and have been recognized with numerous awards. elevator.org.

Gatz was commissioned in part by Walker Art Center (Minneapolis).

NYU Skirball, located in the heart of Greenwich Village, is one of New York City’s major presenters of international work, and has been the premier venue for cultural and performing arts events in lower Manhattan since 2003. The 800-seat theater, led by Director Jay Wegman, provides a home for internationally renowned artists, innovators and thinkers. NYUSkirball hosts over 300 events annually, from re-inventions of the classics to cutting-edge premieres, in genres ranging from dance, theater and performance arts to comedy, music and film.

NYU Skirball’s unique partnership with New York University enables it to draw on the University’s intellectual riches and resources to enhance its programming with dialogues, public forums and conversations with artists, philosophers, scientists, Nobel Laureates and journalists. nyuskirball.org.

Jay Wegman is the Director of NYU Skirball Center for the Performing Arts. Prior to Skirball, he served as Director of the Abrons Art Center for ten years. During his tenure, Abrons was awarded various honors, including a 2014 OBIE Award for Innovative Excellence and a 2015 Bessie Award for Best Production. He was also a Fellow at the John F. Kennedy Center for the Performing Arts in Washington, D.C., and for over a decade served as the first Canon for Liturgy and the Arts at the Cathedral of St. John the Divine. He is the recipient of the 2015 FRANKY award for “making a long-term, extraordinary impact on contemporary theatre and performance in New York City.” While not a performer, he has appeared in Brian Roger’s film “Screamers” (2018), Sibyl Kempson’s “12 Shouts to the Ten Forgotten Heavens” (2017), and “Romper Room” (1969). Jay is a graduate of Yale University. nyuskirball.org.