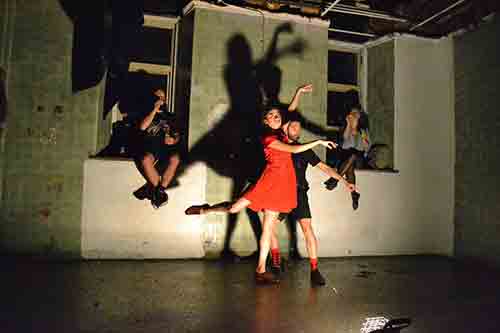 “When you go to AUNTS, you go to something like a party: a gathering that orbits around multiple, overlapping performances, structured to facilitate chaos.” – The New York Times

New York, NY (August 8, 2017) – NYU Skirball’s backstage, dressing rooms, hallways and lobby (everything but the theater itself!) will be transformed when AUNTS takes over the building for this special, one-time-only, FREE event, on Friday, September 15 at 7:30 pm. AUNTS brings together contemporary dance artists and audiences for a special immersive party evening.  Audiences will be able to wander and experience as many or as few performances as they choose, creating their own experiences through chance encounters.

AUNTS was founded by James Kidd and Rebecca Brooks in 2005 and is currently organized by Laurie Berg and Liliana Dirks-Goodman. An underground platform for dance, AUNTS creates events in unconventional spaces with multiple performers, overlapping performances, open dance parties, multi-disciplinary, body/non-body based, time oriented, finished/experimental/unfinished/process art. Since 2005, AUNTS has organized over fifty events and hosted more than four hundred artists from all disciplines and at various points in their careers. Most recently AUNTS worked with the New Museum to present “AUNTSforcamera,” a special multi-venue, international dance-for-camera edition of AUNTS, the ACE Hotel for a month-long creative residency and The Pulitzer Arts Foundation in St. Louis, MO. auntsisdance.com

Co-organizer of AUNTS since 2009, Laurie Berg makes work in a variety of forms including dance and performance, collage and jewelry. In addition to her choreographic work, she engages with the dance community as a producer, curator and event organizer. She recently co-curated the Movement Research Spring Festival 2017, is the 2016 recipient of “The Tommy” Award and a 2016-17 LMCC Workspace Artist-In-Residence.

Liliana Dirks-Goodman is a New York based artist and has a Bachelors and Masters degree in Architecture. She co-organizes AUNTS and makes installations and objects. These things have been seen and happened at the New Museum, chashama, Danspace Project, and Movement Research, among others. She has taught workshops at both the New Museum and Whitney Museum in New York City.

Ash R.T. Yergens is a byproduct of growing up on tater tots and WWE SmackDown. He is a 2016 boo-koo artist-in-residence at Gibney Dance, and a 2016-17 Fresh Tracks Artist at New York Live Arts. His naturally and artificially flavored musings can be found on his Instagram: @buildamanworkshop.

NYU Skirball’s unique place as a vibrant cultural center within New York University enables it to draw on the University’s intellectual riches and resources to enhance its programming with dialogues, public forums and conversations with artists, philosophers, scientists, Nobel Laureates and journalists.

Jay Wegman is responsible for the direction and leadership of the Center’s artistic programming. He previously served as director of the Abrons Art Center at Henry Street Settlement from 2006-2016, where he curated a balance of local, international, emerging and established multi-disciplinary artists. During his tenure, Abrons was awarded a 2014 OBIE Award for Innovative Excellence and a 2015 Bessie Award for Best Production. www.nyuskirball.org.