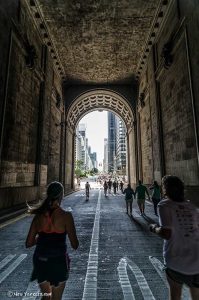 “Held between 7:00 am to 1:00 pm, Summer Streets extends from the Brooklyn Bridge to Central Park, along Park Avenue and connecting streets, with easy access from all points in New York City, allowing participants to plan a trip as long or short as they wish. All activities at Summer Streets are free of charge, and designed for people of all ages and ability levels to share the streets respectfully.”

Also, there’s usually an art installation within the tunnel found south of the Grand Central Terminal Approach which encircles that landmark. Keep in mind that demand is high and there’s almost sure to be a very long line which may keep you waiting for as long as an hour.