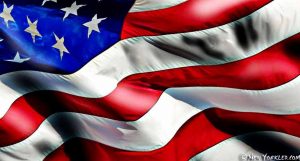 Sons of the Revolution in the State of New York’s

The Parade steps off from City Hall and travels down Broadway towards Fraunces Tavern (exact parade route determined by NYPD day-of).

Flag Day commemorates the adoption of the flag of the United States on June 14, 1777 by resolution of the Second Continental Congress. This special day is observed across the nation, from small towns to big cities, often with parades. Since 1916, Sons of the Revolution in the State of New York has hosted the Flag Day Parade, Celebration, and Open House here in New York City.

On Friday, June 14, hundreds of flag-waving participants from New York City schools and organizations such as the NYPD, FDNY, and various historic societies march through Lower Manhattan to celebrate Flag Day, with a parade beginning at City Hall and concluding with festivities in front of Fraunces Tavern, beneath a four-story American flag hanging from the Museum’s façade.

There, various local dignitaries, military veterans, and local community leaders gather, and the What the American Flag Means to Me Essay Contest winners read their submissions and receive their prizes. Songs are performed by school children, and brief remarks are made honoring “Old Glory” and the parade supporters.