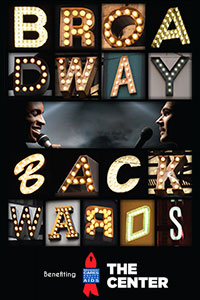 Additional performers will be announced in the coming weeks. Performers subject to change.

Tickets are on sale now. VIP tickets include premium seats and a special post-show party with the cast. A limited number of “Backstage & Beyond” ticket packages also are available, which include the opportunity to see the dress rehearsal, exclusive backstage access, a “meet and greet” with some of the show’s stars, premium seats for the show and more.

Broadway Backwards is the annual celebration where gays and lesbians see their stories told through the great songs of musical theatre, sung by their favorite Broadway performers.It began as a grassroots concert performed at the Center in 2006. In subsequent years, the event grew quickly, performing Off-Broadway, then on Broadway for the last five years. Last year’s sold-out show raised a record-breaking $347,060 for the two organizations.