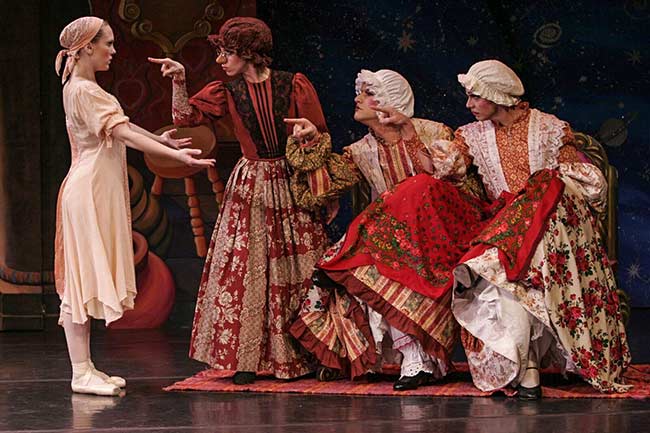 A dancing clock, two wacky stepsisters, and everyone’s favorite rags to riches princess are all part of this traditional enchanting story! A perennial favorite of NYTB audiences across America, Cinderella is one-hour in length with choreography by Donald Mahler, costumes by Sylvia Taalson Nolan, set design by Gillian Bradshaw-Smith to the music of Sergei Prokofiev.

“With its long-running “Once Upon a Ballet” Series, New York Theater Ballet consolidates the classics into hourlong productions for the under-10 crowd and puts parents’ minds at ease: Yes, your children will be able to sit through this show. And in inevitable moments of boredom, fidgeting is acceptable.”

Donald Mahler was trained at the Metropolitan Opera Ballet School by Margaret Craske and Antony Tudor. He joined the National Ballet of Canada in 1956. He danced principal roles in the ballets of Antony Tudor, Walter Gore, and Andree Howard. He joined the Metropolitan Opera Ballet in 1961 and during the directorship of Dame Alicia Markova was made soloist. In 1975 he was engaged as Ballet Master for the Zurich Opera House in Switzerland. In 1979 he returned to the Metropolitan Opera as Ballet Master and in 1982 was appointed Director of the Ballet. At the Met, he began his career as a choreographer, creating ballets not only for the opera but for the Met Ballet’s touring company. He has also choreographed for other companies in the U.S., such as Joffrey II Dancers, Ballet West, Ballet Mississippi, and New York Theatre Ballet. In recent years, he has specialized in staging a number of Antony Tudor’s works – Lilac Garden, Dark Elegies, Echoing of Trumpets, Offenbach in the Underworld – for companies in the U.S., France, Canada, and Japan. He reconstructed Offenbach in the Underworld and Pillar of Fire for American Ballet Theatre. Mr. Mahler has taught widely for companies and schools in the U.S. and Europe. He also works extensively in Japan as teacher and choreographer. In 1992, he was awarded a two-year Choreographer’s Fellowship from the National Endowment for the Arts.

With its ever-expanding repertory, New York Theatre Ballet’s cutting-edge programming brings fresh insight to classic revivals paired with the modern sensibilities of both established and up-and-coming choreographers. Going strong for 40 years, New York Theatre Ballet’s diversity in repertory explores the past while boldly taking risks on the future.