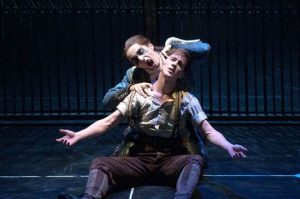 New York, N.Y, October 2, 2013 – Blood-sucking Vampires take to the stage of New York City Center on Halloween, October 31, in Matthew Bourne’s SLEEPING BEAUTY. As a special Halloween treat (or trick), the audience is invited to a free pre-show Halloween party at The Dream New York, complete with Vampire-inspired Blood-tini cocktails and complimentary Bloody Good Bubbly champagne cocktails for anyone in costume.”
The party (for Sleeping Beauty ticket holders only) will be held at The Bar at The Dream New York, 210 W. 55th Street (between Broadway and 7th Avenue, down the block from City Center), from 5:30 – 7:15 pm.

Matthew Bourne’s Sleeping Beauty is like no other, lacking a prince, but gaining vampires, evil Counts and a handsome gamekeeper. The story begins in 1890, at the height of the fin-de-siecle period, when fairies, vampires and decadent opulence fed the gothic imagination. Years later, when the princess awakens from her century-long slumber, she finds herself in the modern day, a world more mysterious and wonderful than any fairy tale.

Matthew Bourne, who won two Tony Awards for his all-male Swan Lake, is bringing his newest work to New York, where it opens at City Center on October 23 for a two-week run, prior to a national tour Bourne is widely hailed as the UK’s most popular and successful choreographer/ director. He is the creator of the world’s longest running ballet production (Swan Lake), a five-time Olivier Award winner, and the only British director to have won Tony Awards for both Best Choreographer and Best Director of a Musical.