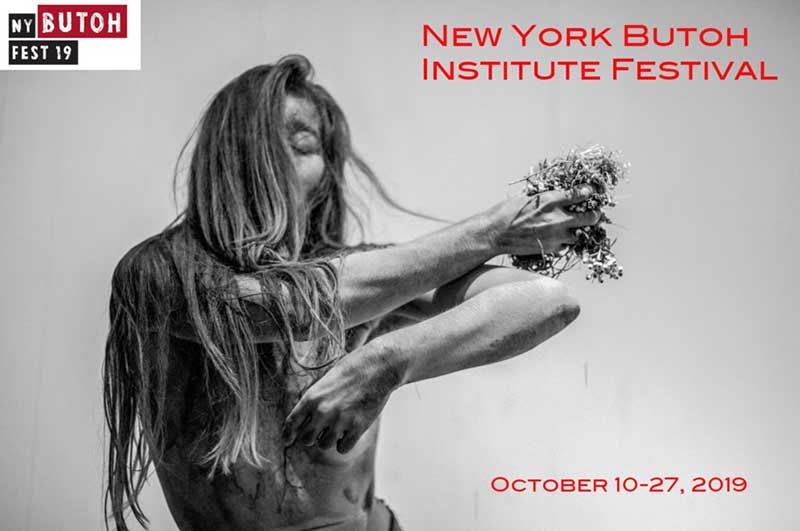 Curated by New York Butoh Institute’s founder Vangeline, the Festival will consist of an exciting program of Butoh workshops and masterclasses, as well as seven nights of groundbreaking performances presented at Theater for the New City. The festival will conclude on Sunday, October 27 with a lecture and short film celebrating the founder of butoh, Tatsumi Hijikata, and the 60 years of this historical and revolutionary art form as it continues to evolve into the 21st century.

The bold butoh performances being presented during the festival will feature 14 female dancers from Japan, Colombia, Norway, Italy, Germany, France, and the U.S. One of the pieces, Hijikata, Mon Amour, will be performed by Vangeline as an homage to butoh founder Tatsumi Hijikata. A highlight of the piece will be the costume Vangeline will wear: an exact replica of the bold red costume Tatsumi Hijikata wore in his legendary butoh performance of Tatsumi Hijikata and The Japanese-Revolt of the Flesh in 1968.

Thanks to a loan from the Tatsumi Hijikata Archives and a Janet Arnold Award from the Society of Antiquaries of London, the Festival is able to showcase the replica of this iconic costume worn by Tatsumi Hijikata in Revolt of the Flesh. Hijikata’s costume remains a totem for butoh-it holds secrets of the avant-garde art form.

Much like butoh itself, it was born at the confluence of East and West. This costume chronicles the evolution of postmodern art in Japan. The Festival will close with a short film of Tatsumi Hijikata in his 1968 solo, and a lecture with costume expert Todd Thomas who recreated the costume, and who will discuss his process, shedding light on how the original costume was designed and constructed. Prior to and during the presentation, the replica will be on display for audience members to see.

VANGELINE THEATER/NEW YORK BUTOH INSTITUTE aims to preserve the legacy and integrity of Japanese Butoh while carrying the art form well into the future. The unique art of Butoh originated in post- World War II Japan as a reaction to the loss of identity caused by the westernization of Japanese culture, as well as a realization that ancient Japanese performing traditions no longer spoke to a contemporary audience. One of the major developments in contemporary dance in the latter half of the 20th century, Butoh combines dance, theater, improvisation and influences of Japanese traditional performing arts to create a unique performing art form that is both controversial and universal in its expression. The Vangeline Theater is home to the New York Butoh Institute, dedicated to the advancement of Butoh in the 21st century. www.vangeline.com

Vangeline is a teacher, dancer, and choreographer specializing in the Japanese postwar avant-garde movement form Butoh. She is the artistic director of the Vangeline Theater (New York), a dance company firmly rooted in the tradition of Japanese Butoh while carrying it into the 21st century, and the founder of the New York Butoh Institute. Her work has been heralded in publications such as The New York Times (“captivating”), Los Angeles
Times, (“moves with the clockwork deliberation of a practiced Japanese Butoh artist”) and LA Weekly, to name a few. More recently her solo “Butoh Beethoven: Eclipse” received critical acclaim from the Ballet Review.

Vangeline is a 2018 NYFA/ NYSCA Artist Fellow in Choreography. She is also the winner of the 2015 Gibney Dance’s Beth Silverman-Yam Social Action Award. Film projects include a starring role alongside actors James Franco and Winona Ryder in the 2012 feature film The Letter, written and directed by Jay Anania, She has performed with/for Grammy Award-winning artists SKRILLEX and Esperanza Spalding. She is the author of a forthcoming book about butoh and looks forward to curating the second New York Butoh Institute Festival 19 this October.

THEATER FOR THE NEW CITY (TNC) is a Pulitzer Prize-winning community cultural center that is known for its high artistic standards and widespread community service. One of New York’s most prolific theatrical organizations, TNC produces 30-40 premieres of new American plays per year, at least 10 of which are by emerging and young playwrights. Many influential theater artists of the last quarter century have found TNC’s Resident Theater Program instrumental to their careers, among them Sam Shepard, Moises Kaufman, Richard Foreman, Charles Busch, Maria Irene Fornes, Miguel Piñero, Jean-Claude van Itallie, Vin Diesel, Oscar Nuñez, Laurence Holder, Romulus Linney and Academy Award winners Tim Robbins and Adrien Brody. TNC also presents plays by multi-ethnic/multi-disciplinary theater companies who have no permanent home. Among the well-known companies that have been presented by TNC are Mabou Mines, the Living Theater, Bread and Puppet Theater, the San Francisco Mime Troupe, and COBU, the Japanese women’s drumming, and dance group. TNC also produced the Yangtze Repertory Company’s 1997 production of Between Life and Death, which was the only play ever produced in America by Gao Xingjian before he won the 2000 Nobel Prize for Literature. TNC seeks to develop theater audiences and inspire future theater artists from the often-overlooked low-income minority communities of New York City by producing minority writers from around the world and by bringing the community into theater and theater into the community through its many free festivals. TNC productions have won the Pulitzer Prize for Drama and over 42 OBIE Awards for excellent in every theatrical discipline. TNC is the only Theatrical Organization to have won the Mayor’s Stop The Violence award.