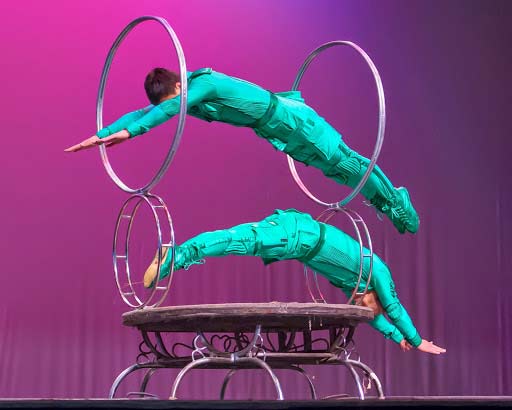 Schimmel Center at Pace University presents New Shanghai Circus on Sunday, February 24, 2019 at 4pm. Tickets start at $29 and can be purchased online at www.schimmelcenter.org, by phone at 212-346-1715, or by visiting the Schimmel Center Box Office at 3 Spruce Street in Manhattan. Box office hours are Tuesday-Saturday, Noon-5pm, and then beginning three hours prior to each performance, through intermission.

New Shanghai Circus features astonishing athletes while executing breathtaking feats as they stretch the limits of human ability in this spellbinding show that draws upon 2,000 years of Chinese circus traditions. If it’s humanly possible – and even if it seems as if it’s not – these acrobats, jugglers and contortionists do it with spectacular flair.

“The New Shanghai Circus has a neat trick of cutting the music during its most astonishing feats, so that the soundtrack becomes the “oohs,” “ahs” and “Oh, my Gods!” from the stunned audience.”

New Shanghai Circus is considered to be China’s most celebrated acrobatic company; the performers for the New Shanghai Circus have stunned and amazed audiences all over the world. Each year the troupe adds new performers creating a revolving line-up of award winning favorites the Human Strength and Beauty, Plates Spinning, Jar Jugglers, Diabolo, Magic Clock, Butterfly Lovers, and more. Over 40 Acrobats of China showcase dramatic interpretation of classic Chinese dance and physical performance art with extraordinary and inventive feats of strength and skill, control and balance, grace and charisma.

$20 children tickets available for children 12 and under and must be purchased with an adult ticket. For more information please visit http://schimmelcenter.org/event/new-shanghai-circus.

About the House Left Bar at Schimmel Center

Please note, no outside food or beverage is allowed in the Schimmel Center theater.

This season, we are excited to offer an array of world premieres and inaugural events, from the first annual Crossing Bridges Music Fest, that celebrates traditional and modern Americana with contemporary singer-songwriters and legacy artists, to a modern premiere dance piece calling glenn by Ate9 with music composition and percussion by Wilco‘s Glenn Kotche, to the premiere of Fearless: B-Sides with Hamilton‘s Mandy Gonzalez.

We are building on the success of our comedy series by adding more artists to the lineup, including veteran comedians Caroline Rhea and Louie Anderson and rising star Hari Kondabolu. You won’t want to miss Comedy Central’s The Daily Show‘s Ronny Chieng, Dulcé Sloan, and Rory Albanese.