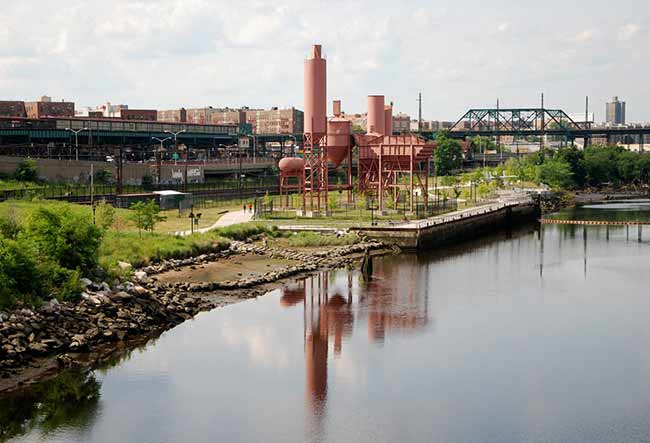 A free public festival at Concrete Plant Park in the Bronx

IdeasCity Bronx will feature conversations, artist talks, performances, and activations by an array of cultural agents engaging the physical, social, and economic forces that define the Bronx and other cities. Highlights will include keynote conversations by Teddy Cruz and Fonna Forman and Jon Gray of Ghetto Gastro, and a series of participatory workshops organized by Xaviera Simmons, Torkwase Dyson, Oscar Oliver-Didier, Coco June, Marquita Flowers, and Monxo López and Libertad Guerra of South Bronx Unite. Pop-up activations by Bronx-based art and activist groups and food vendors will operate throughout the afternoon, organized with DreamYard, a nationally recognized community organization that works with Bronx youth, families, and schools to build pathways to equity through the arts.

Themed New Ecologies 3755, this iteration of IdeasCity focuses on the effects of climate change faced by communities in the Bronx, and the inextricable link between the conditions of our planet and the state of culture and society. IdeasCity has invited locally and internationally recognized practitioners to design interactive workshops focused on key areas of inquiry pertaining to the theme of New Ecologies. Workshops are centered on topics ranging from Waterfront De-Industrialization, Divesting from Whiteness, Borders and Migration, Housing Production and Preservation, Public Health and Pleasure, and Food Justice, and highlights include a somatic movement workshop on strategizing Resources for Resistance, storytelling performances combating Food Apartheid through agricultural autonomy, and a livestream conversation on the Architecture of Diaspora between South Bronx activists and allied groups in Santurce, Puerto Rico.

“The number 3755 refers to the 3,755 days between IdeasCity Bronx and the start of 2030, noted internationally as the deadline for irreversible climate crisis. The number also evokes a distant future, over a millennium away, one that we might imagine shaped by the Bronx and by communities that were erased or marginalized in the last millennium,” stated V. Mitch McEwen, Curator of IdeasCity. “Inspired by the urgency around climate change, artists and organizations in the Bronx are working to address structural inequality, real estate development models, and even national politics, topics that will take center stage at IdeasCity Bronx.”

Prior to the festival, IdeasCity will release a podcast produced in collaboration with Gesso, members of NEW INC, the New Museum’s cultural incubator, who have developed a free location-based mobile app for innovative audio content. The podcast is designed to accompany visitors en route to the festival, expanding on the program’s themes with additional information, conversations, and interviews with IdeasCity Bronx speakers and community leaders.

On Friday, September 20, 2019, IdeasCity and the Bronx Museum of the Arts will cohost a workshop for local and emerging practitioners that will consider the inequalities produced and reproduced by urban spatial relationships, and the shifting approaches devised by artists, designers, planners, and architects engaging with public space in the Bronx’s contemporary landscape.

IdeasCity Bronx will be held at Concrete Plant Park, located on the Bronx River between Westchester Avenue and Bruckner Boulevard. Home to a functioning concrete plant from the late 1940s to 1987, Concrete Plant Park’s revitalization began in 2000 under the stewardship of the Parks Department and the Bronx River Alliance. In addition to salt marshes, greenways, a promenade, and boat-launch, Concrete Plant Park is also home to the Bronx Foodway, a pilot project examining how a sustainable food landscape can be integrated into a public park.

IdeasCity is a collaborative, civic, and creative platform that starts from the premise that art and culture are essential to the future vitality of cities. This international initiative provides a forum for designers, artists, technologists, and policymakers to exchange ideas, identify challenges, propose solutions, and engage the public’s participation. The initiative was cofounded at the New Museum by Lisa Phillips, Toby Devan Lewis Director, and Karen Wong, Deputy Director. Past IdeasCity programs have taken place in New York (2011, 2013, 2015, and 2017), Istanbul (2012), São Paulo (2013), Detroit (2016), Athens (2016), Arles (2017), Toronto (2018), and New Orleans (2019). For more information, visit ideas-city.org.

DreamYard collaborates with Bronx youth, families, and schools to build pathways to equity and opportunity through the arts. Through partnerships with over fifty public schools in the Bronx, DreamYard Prep High School, and the DreamYard Art Center, DreamYard works with over 15,000 young people each year to develop the tools necessary to become creative and engaged citizens, life-long learners, and the leaders and innovators of the twenty-first century.