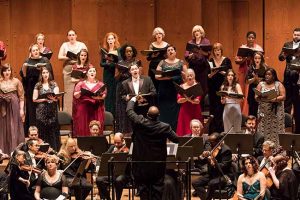 Orff’s provocative settings of Medieval traveling students and ex-monks who pursued a roaring life of gambling, drinking and making live. With “wine, women and song,” Carmina is sexy, passionate and unforgettable.

A musical depiction of the composer’s hope for brotherhood and peace and in celebration of the 100th anniversary of his birth.

ABOUT THE NATIONAL CHORALE

Founded in 1967, the National Chorale is the only professional choral company in the United States to have established and maintained an annual subscription season in the major New York City concert halls – 50 seasons in David Geffen Hall,  with additional concerts at Carnegie Hall.  It presents a broad repertory of choral-orchestral works; seldom-performed works from many stylistic periods; opera-in-concert; American music theatre; and contemporary works, including commissions by the Chorale for its Lincoln Center Season.

The Chorale also has a major Partnership with the NYC Professional Performing Arts High School in Manhattan, now in its 8th year, where a team of Chorale artist/teachers lead and develop the PPAS Vocal/Choral Program daily throughout the school year.  The PPAS Choir will perform at Lincoln Center at each National Chorale performance during the 2017-2018 Season.

Everett McCorvey is in his fourth season as the Artistic Director of the National Chorale. Vocal Excellence is a hallmark of Dr. McCorvey’s work with professional choirs and with professional singers in concerts, masterclasses and workshops throughout the world. Over a span of over 35 years, Dr. McCorvey has engaged choirs and audiences on 4 continents in moving and dynamic experiences with his unique and committed interpretation of choral music of all genres. Dr. McCorvey is also the founder and Music Director of the American Spiritual Ensemble, a group of 24 professional singers performing spirituals and other compositions of African-American composers. He is a frequent advisory panelist and on-site reviewer for the National Endowment for the Arts in Washington, D.C. and he has served on the Boards of the National Assembly of State Arts Agencies, National Opera Association and the Kentucky Arts Council.  Dr. McCorvey has recently been invited to serve as a jurist on the Opera For All Voices initiative established by San Francisco Opera and Santa Fe Opera. The panel will review new operatic works for the industry with the goal of bringing new audiences to opera. On working with the National Chorale, Dr. McCorvey said “Celebrating the 50th Anniversary of great choral singing with the National Chorale is indeed an honor and a privilege.  It is my fervent hope that we can continue to sing, share and experience the goodness of humanity through music and learn of each other better through sharing in the arts.”

In 1962, Philharmonic Hall-renamed Avery Fisher Hall in 1973 and later renamed David Geffen Hall in 2015-became one of the first buildings to be completed on the Lincoln Center site and home to one of its first resident organizations, the world-renowned New York Philharmonic, the oldest symphony orchestra in the U.S. Today, David Geffen Hall hosts notable performances by acclaimed orchestras and artists from around the globe, as well as galas, film premieres, graduations, and conferences. Located on the north side of Josie Robertson Plaza facing Lincoln Center’s iconic Revson Fountain, David Geffen Hall’s spacious lobby and promenade feature such eminent artwork as Rodin’s bust of Gustav Mahler and Dimitri Hadzi’s sculpture The Hunt, in addition to wraparound views of the Lincoln Center campus.