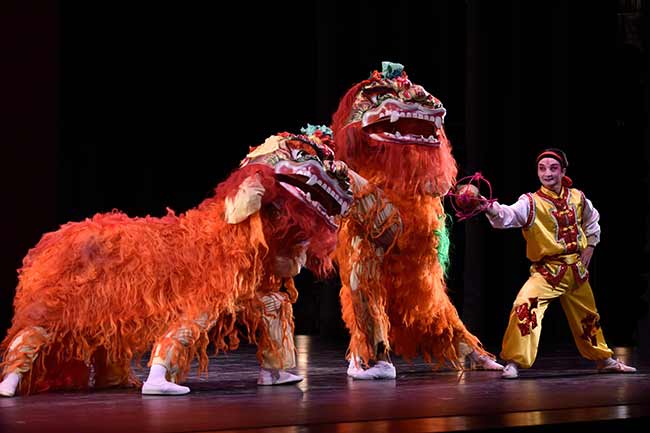 Announce Guest Artist Line-Up for the

Year of the Pig Celebration at NJPAC

The Nai-Ni Chen Dance Company will celebrate the end of the Chinese Zodiac cycle with a special program steeped in symbolism and virtue, expressing the Company’s commitment to the art and the culture of the community. For the occasion, the company has invited several world-renowned artists to join its program

The Nai-Ni Chen Dance Company announces a colorful and vibrant special Chinese New Year Celebration at the New Jersey Performing Arts Center (NJPAC), 1 Center Street, Newark, NJ 07102, on Saturday and Sunday, February 2 and 3, 2019 at 2pm. Tickets are $17-35 and are available by phone at (888) GO-NJPAC or online at https://www.njpac.org/events/detail/year-of-the-pignai-ni-chen-dance-company.

This year, Nai-Ni Chen bring a new Bamboo themed production aimed to take audiences beyond cultural boundaries. Nai-Ni Chen chose bamboo as a theme to celebrate the Year of the Pig.

Why Bamboo? First, the Chinese phonetic sound for Bamboo is Zu, is similar to the sound for pig (Zu). Second, and perhaps more important, is because Bamboo is the most celebrated plant in Chinese culture. As far as 1000 years ago, during the Sung Dynasty (960-1269), noted for art and literature and philosophy, scholars have used bamboo as a symbol for the resiliency, humility, and honesty to inspire each other. The great poet and Literati, Su Dong Po said “I cannot live a day without bamboo”.

According to Nai-Ni Chen; in the current social and political climate, artists, like the scholar of the past generations, needs encourage their fellows and communities that moral character of humility, honesty and resiliency needs to be held at the highest no matter which way the wind blows. Art is what defines us as a society and civilization, and these traditional and contemporary dances she has created and choreographed, advocates for the cultural values and morality that she, as a female Chinese immigrant artist, brings to the United States. In this wonderful time of celebration of the end of the Zodiac cycle, she has prepared a festive and colorful experience that everyone can enjoy and yet carries the message of culture and value that we all share in common.

The Year of the Pig is expected to be a festival year of great abundance and prosperity. To celebrate the Year of the Pig, the Company has developed a rich and fantastic program that incorporates many positive aspects of Chinese and Chinese American immigrant culture in the program. Beside the remarkably acrobatic and beautiful dances, the Company has also invited special guest artists: Bamboo Flute master Tao Chen, Peking Opera artist Yun-Hong Jia, and paper cut master Hotien Cheng.

conductor of Chinese orchestra, is the founder and director of the Melody of Dragon, Inc.. He was the artistic director and conductor of the Chinese Music Ensemble of New York and conductor of New Jersey Buddha’s light Youth Chinese Orchestra. He is also the 27th generation musician of Zhi-Hua Buddhism Music. The New York Times called Chen Tao, a “poet in music” and his playing “a miracle of the oriental flute.” Conductor Herbert Von Karajan praises him as an artist who “performs with his soul.” Chen Tao is a graduate and former Associate Professor at the prestigious Central Conservatory of Music in Beijing. He was the winner of the 1989 National Folk Instrument Competition in China and has toured throughout U.S., Germany, Italy, France, England, Holland, Finland, Singapore, Hong Kong, Taiwan and Macao. He has collaborated with the BBC Philharmonic and the Notional Orchestra of Lyon. His playing can be heard on several soundtracks of Hollywood movies including Seven Years in Tibet, Corrupter (with the New York Philharmonic) and on the PBS documentary Under the Red Flag.

Yong-Hong Jia is a professional Kunqu and Peking opera performer trained in the Beijing Kunqu Academy and performed principal roles in the Beijing Kunqu Opera Theatres in Beijing for many years. Ms. Jia was invited by New York Lincoln Center Festival to perform one of the principal roles in The Peony Pavilion in 1999 and performed in the subsequent tours, in France, Italy, Denmark, Australia, and Singapore. After the tour, she appeared in Beijing opera and Kunqu in major theatres and Chinese communities across North America. Aside from her stage appearances, Ms. Jia also starred in many award-winning movies and TV productions in China. She is currently serving as the President of Renaissance Chinese Opera Society in New York City.

Master Paper Cut Artist Ho Tien Cheng is oen of the few free-form style paper cutter Master in the world who can translate any three dimensional image onto the two dimensional paper. Hou-Tien Cheng has spent 50-years in his craft, and astonished millions of audience with his scissors. He has been featured on national TV commercials for Citigroup, and collaborated in the visual design of Nai-Ni Chen’s dance projects.

Bringing the dynamic freedom of American modern dance together with the elegant splendor of Asian art, the Nai-Ni Chen Dance Company is one of the most visible Asian American dance companies in America. Ms. Chen’s unique choreography transports audiences beyond cultural boundaries to the common ground between tradition and innovation, rising beyond form into the spirit.

One of the few Asian American professional dance companies with an extensive season of touring and performing around the world, Nai-Ni Chen has also developed Arts in Education residency programs in school districts to bring culture and arts into educational settings. Its colorful and engaging programs and workshops have reached over one million young audience members in the NY/NJ area. The Company is currently in residence at New Jersey City University and has been a Principal Affiliate of the New Jersey Performing Arts Center since its inception.

The Nai-Ni Chen Dance Company has the honor of having received more than fifteen awards from the National Endowment for the Arts and numerous Citations of Excellence and grants from the New Jersey State Council on the Arts. Other funders include the Geraldine R. Dodge Foundation; Mid-Atlantic Arts Foundation; the Hyde and Watson Foundation; Horizon Foundation, The Irving and Laurie Blanchard Foundation; the E.J. Grassman Trust; PSE&G; the Lower Manhattan Cultural Council; Verizon; Sony; New Music/USA; Chase Manhattan Bank; the Mid-Atlantic Arts Foundation and others.