Year of the Monkey

of the Beijing Kunqu Theater 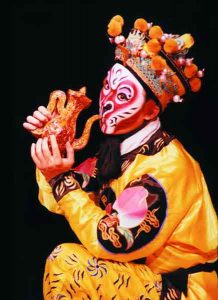 Brooklyn Center for the Performing Arts at Brooklyn College announces that internationally acclaimed Peking Opera performer Feng Gu will join the Nai-Ni Chen Dance Company for its annual Lunar New Year Celebration on Sunday, January 31, 2016 at 3pm.  Mr. Gu, a principal member of the Beijing Kunqu Theater, will perform the role of the Monkey King in a special excerpt from Monkey King in the Heavenly Palace, one of the most celebrated Peking Opera productions in China. Mr. Gu’s U.S. appearance is sponsored by the Consulate General of the People’s Republic of China.  Tickets are $25 for adults and $12.50 for children (ages 12 and under) and can be purchased at BrooklynCenter.org or by calling the box office at 718-951-4500 (Tue-Sat, 1pm-6pm).

Partnering with Brooklyn Center for the third year in a row, the prestigious Nai-Ni Chen Dance Company presents an all-new celebration of Chinese culture commemorating the Year of the Monkey, a year characterized by cleverness, curiosity, and playful mischief.  The festive, family-friendly event will also showcase thrilling choreography inspired by shadow puppetry, live music performed by the Chinese Music Ensemble of New York, and a traditional Chinese marketplace.

The performance will open with the traditional Double Lion Dance, an audience favorite that represents the coming of spring and a prayer for peace in its depiction of a small child in harmony with ferocious lions. Also included will be a Mongolian Chopstick Dance, the Coinstick Dance from Hubei, and a solo piece entitled Joy, performed by guest artist Jia Liu, a former teacher at the prestigious Beijing Dance Academy.

Two of Nai-Ni Chen’s original works will be featured in the program, showcasing her signature cross-cultural style that fuses the dynamism of American modern dance with the elegant splendor of her own Chinese culture. Moveable Figures, a dance for seven, is inspired by the art of shadow puppetry. Mirage, created by Ms. Chen in 2012, is inspired by her first experience on the Silk Road, incorporating the amazing cultural dance of the Uyghur people and rhythm from Persia and Central Asia.

Now in its 27th season, New Jersey’s acclaimed Nai-Ni Chen Dance Company seeks to bridge the gap in understanding between cultures by fusing the dynamic freedom of American modern dance with the grace and splendor of Asian art, taking their audiences on journeys beyond cultural boundaries to where tradition meets innovation and freedom arises from discipline.

Since its inception in 1988, the Company has earned a broad base of public support, becoming the pride and joy of Asian-American communities across the United States with tours to major performing arts centers in more than 30 states.  In 2001, the Company also began touring abroad and has performed in Central America, Korea, China, Germany, Poland, Russia, Lithuania, and Mexico. Having participated in teaching and performance activities at both the Beijing International Dance Festival in China and the Chang Mu International Dance Festival in Seoul, South Korea in 2014, it is one of the most widely toured professional Asian-American companies in the United States, reaching more than 100,000 audience members a year.

In addition to its extensive season of touring and performing, the Company also has developed Arts in Education residency programs in many school districts to bring culture and arts into educational settings.  For three years, the Company conducted the afterschool dance program at Shuang Wen School in New York

City and the Poetry Live! Project with Litchfield Performing Arts, Inc. in Connecticut, which reached more than 1,000 children each year.  In New Jersey, Nai-Ni Chen Dance Company has been in residence at Westminster School in Elizabeth for more than 10 years and has successfully integrated dance, music, and poetry with academic disciplines.

About Feng Gu (The Monkey King)

Mr. Gu is a principal member of the Beijing Kunqu Theater. He started his study of Chinese Opera at age 11, specializing in the role of the Monkey King, a subspecialty that is regarded as one of the most difficult because the actor must play both an animal and a god, be well trained in acrobatics, and deliver a performance with highly dramatic demands.  In 2006 he was one of the five top medalists in the worldwide Monkey King competition, which included artists from China, Hong Kong, Malaysia, and other Chinese diasporas around the world. As a leading artist, he has been called upon to perform for visiting dignitaries including the Royal family of England, the Prime Minister of Russia, and other international government leaders. He has toured Russia, German, Austria, Japan, and the United States.

About the Chinese Music Ensemble of New York

A non-profit organization founded in 1961, the Chinese Music Ensemble is the oldest, largest, and only full-scale Chinese orchestra in the United States and the Americas, with a membership of more than forty musicians. The Ensemble’s repertory ranges from ancient classical to modern compositions, spanning some fifteen hundred years of history. With the goal of promoting Chinese music, the Ensemble has performed at major concert halls in New York and at schools, colleges, and venues throughout the Eastern United States.

Brooklyn Center for the Performing Arts’ presentation of Nai-Ni Chen Dance Company’s Lunar New Year Celebration is made possible, in part, by Macy’s, the Mertz Gilmore Foundation, and The Harkness Foundation for Dance.