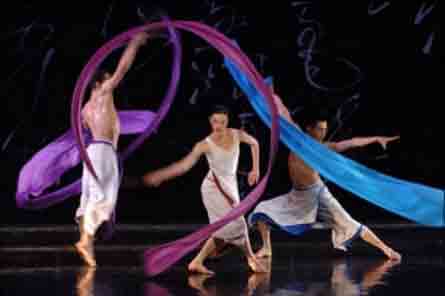 Hot off the trail of sold-out performances of their Year of the Rooster Celebration at the New Jersey Performing Arts Center and Brooklyn Center for the Performing Arts, the critically acclaimed Nai-Ni Chen Dance Company will take residence at Centenary Stage Company on the campus of Centenary University in Hackettstown in April with two public programs that celebrate the Company’s artistic vision and heritage.

To introduce families with children in western New Jersey to the Nai-Ni Chen Dance Company, the Centenary Stage Company will bring Nai-Ni Chen’s new, story-based production Red Firecrackers to the Lackland Center for the Performing Arts on campus.  Red Firecrackers is the legend of the origin of the Chinese Lunar New Year celebration where a group of villagers defeated the monster of the ages and started the custom of decorating and wearing red, giving gifts, lightingup the sky with fireworks and playing with firecrackers.   It is a delightful production for families to enjoy together.  Red Firecrackers will be presented on Saturday, April 1, 2017 at 2pm.  For tickets please call Centenary Stage Company at 908-979-0900 or online: http://www.centenarystageco.org/first-chinese-new-year.php.

On Saturday, April 9, 2017 at 2pm, the Company will showcase its visionary new program, CrossCurrent, comprised of a series of works that highlight Ms. Chen’s unique cross-cultural contemporary dance style that brings together the freedom and American modern dance and the discipline of her Asian American heritage. The dances in CrossCurrent showcase different aspects of Nai-Ni Chen’s work as she encounters different elements of western culture as a woman from the east.

The program will feature Nai-Ni Chen’s most recent work, Space Oddity with music by David Bowie, adapted to classical instruments for the Ahn Trio, as well as the Ahn’s Yu Rung by Pat Matheny. The evening will also include The Way of Five – Earth, which is part of the five element series from Ms. Chen where she studies the creative and destructive power of the elemental forces that govern our lives; and her most recent group work, Calligraffiti Variations with music by Huang Ruo for seven dancers, where she associates her experience with the street art form and the supreme art of Chinese calligraphy that has influenced her movement style since she started to dance.  For tickets please call Centenary Stage Company at 908-979-0900 or online: http://www.centenarystageco.org/nai-ni-chen2017.php