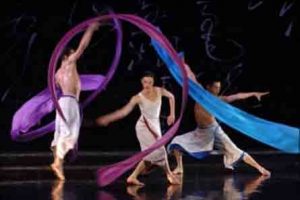 The Nai-Ni Chen Dance Company, a renowned international touring dance company led by Chinese American choreographer Nai-Ni Chen, will launch its 30th anniversary season at New York Live Arts with the retrospective production CrossCurrent, which will showcase Chen’s distinctive cross-cultural style and the diverse influences that inform her work. Highlights include Chen’s Callligraphy II, Whirlwind, and recent works Truthbound and Bamboo Rap. Performances run December 5-7 at 7:30pm and December 8 at 2pm. Tickets are $30 / $15 for students and seniors and can be purchased at https://newyorklivearts.org/event/crosscurrent/.

CrossCurrent will open with one of Chen’s earliest signature works, Calligraphy II, which explores the spirituality, the flow of energy and the dynamics of the brush strokes in the art of Chinese writing with an original music score by Joan La Barbra and set designed by Myunghee Cho. She will then share more recent works: Truthbound, developed in residency in Trier, Germany in reaction to the crisis of faith and trust today; followed by Bamboo Rap, an experimental piece created in collaboration with hip-hop artists and DJs exploring the sound of Chinese language with contemporary urban dance vocabulary, both rooted in storytelling and the desire for equality and justice. The concert will conclude with Whirlwind, a dance inspired by Chen’s journey to the Silk Road with music by Glen Velez. The dance explores trance, rhythmic breathing, sound and spiral motion.

“When all seven performers swirl through individual patterns simultaneously, you imagine a scroll dancing.” Deborah Jowitt, The Village Voice

“In their body and visual language sensitively created fantasy and poetry. Tradition and experiment are combined with dance-like precision and dynamics.” Eva-Maria Reuther, Volksfreund.

Also Upcoming in the Nai-Ni Chen Dance Company 2019-20 Season:
In January and February 2019, to chase away the winter blues, the Company will celebrate the arrival of the Year of the Rat and the first year of the cycle of metal with a vibrant, colorful extravaganza of the Company’s Lunar New Year Festival at Staten Island College, Queens College, The Westhampton Beach Performing Arts Center on Long Island, The New Jersey Performing Arts Center, and Ocean County College in New Jersey. This New Year’s program highlights will include a diverse line up of top-tier Chinese artists as well as new dances by Nai-Ni Chen.

The season will continue in March with appearances by up-and-coming Asian American artists at the Company’s resident work at Flushing Town Hall. In its 6th year, the Company has been presenting new music and dance talents in the community.

The Nai-Ni Chen Dance Company will be on Ellis Island in the Great Hall of Immigrant for the Asian American Heritage Month in May. The Company will be presenting the 6th Imagine Ellis Island Asian American Pacific Islander Heritage Festival which will bring together a diverse array of artists focused on preserving and creating culturally specific work.

Followers and audience can gain an early glimpse of the Company’s new works during our open rehearsal sessions at Flushing Town Hall in New York, at NJPAC in Newark, as well as at pop-up locations around the NY/NJ area to be announced on our e-newsletter.

In addition to developing new dances, Nai-Ni Chen is equally committed to introduce the Chinese American heritage to children and family in diverse communities. Her K-12 assembly program, The Art of Chinese Dance, is performed throughout the year in schools and community centers in Connecticut, New Jersey, New York, and Pennsylvania.

Continuing its commitment to preserve and advance dance in the Chinese American community in New Jersey, the Company offers regularly scheduled community workshops at the Metuchen Dance Centre every Saturday with award-winning instructors from China, Taiwan, and the U.S.

Nai-Ni Chen Dance Company
Nai-Ni Chen has been making dances professionally for over thirty years since coming to the US. She has built a diverse repertoire of over 80 original works and toured to major venues in the US and international festivals in 12 countries around the world. A cross-cultural choreographer who aims to bring audience across the cultural boundaries, she has developed unique movement and choreographic styles that reflect the grace and splendor of the Chinese cultural traditions she studied in Taiwan since youth and the dynamic spirit of modern dance that she acquired in New York from luminaries such as Mary Anthony, Bertram Ross, Doris Rudko and Patricia Rowe.

Nai-Ni Chen has received multiple Choreographer Fellowships from the National Endowment for the Arts and the New Jersey State Council on the Arts. She has been a principal affiliate of the New Jersey Performing Arts Center and was a resident artist of the Harlem School of the Arts. Her contribution to the immigrant cultural experience has been honored by OCA and the International Institute. Commissions have come from the Joyce Theater Foundation, the Lincoln Center Institute, the New Jersey Performing Arts Center, Towson University, Dancing in the Streets, New Jersey Ballet, Ballet Met, and the Cleveland Dancing Wheels. Nai-Ni is currently in residence in New Jersey City University creating a new dance program for the university in collaboration with the Joffrey Ballet School as well as pioneering a program with the University’s Laboratory School for children with multiple disabilities.