“A blossom of color, energy and motion, like endlessly proliferating forces of cosmic energy.” 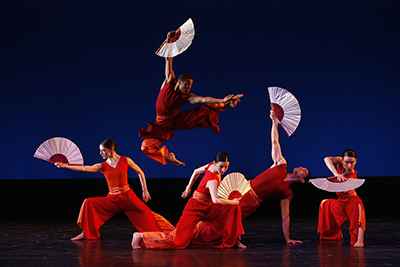 Brooklyn Center for the Performing Arts at Brooklyn College continues its 60th Anniversary Season, once again partnering with Nai-Ni Chen Dance Company for its second annual Lunar New Year Celebration, on Sunday, January 25, 2015 at 3pm. Tickets are $25 for adults and $12.50 for children (ages 12 and under) and can be purchased at BrooklynCenter.org or by calling the box office at 718-951-4500 (Tue-Sat, 1pm-6pm).

Recipient of China’s prestigious Golden Lotus Award, choreographer Nai-Ni Chen and her company will once again take Brooklyn Center’s audiences on a visually delightful, culturally rich tour of the 3,000-year-old Chinese civilization. This year’s celebration honors The Year of the Sheep — a year of peace, love, and woolly gentleness according to the Chinese calendar.

The repertoire for the performance will include “Double Lions Welcoming Spring,” a version of the popular Lion Dance; “Gu Ze Yung Ge,” a dance from the Han people in Northeast China that incorporates fans, handkerchiefs, and drums in a celebration of the harvest; the rhythmic “Hubei Coin Stick Dance,” originally done by street performers in the Hubei province; and the famous “Dragon Dance,” symbolizing imperial power and nature’s grace. The Company will also perform an excerpt from Peach Flower Landscape, a dance drama portraying a peaceful agricultural community living in perfect harmony with the land, commissioned in 1995 by the Lincoln Center Institute.