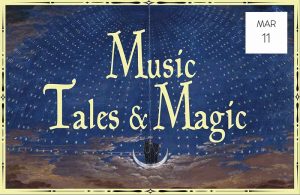 While magic, myth and fairy tales have proved rich sources of inspiration for many composers over the centuries – allowing for musical allegory, drama, mischief, exoticism and escapism – there is also something magical about the arts of composition and performance themselves: notes on the page, conjured from a composer’s imagination, are brought to life by a performer’s marvelous talent, often to spellbinding effect.

Mozart’s The Magic Flute – an opera steeped in magic and mythology, but using everyday language, and full of folksy tunes – was a gift to later generations. Beethoven dwelled lovingly on its homely melodic qualities in his Variations, based on Pamina and Papageno’s delightful, teasing duet in Act One.

The love of folk-inflected song and delight in magic and mystery of The Magic Flute find direct echo in the exquisite intimate melody of ‘Solveig’s Song’ from Grieg’s incidental music for Peer Gynt, and in his wonderfully rich and varied Cello Sonata. And for a touch of Nordic-Germanic myth, we have Popper’s Dance of the Elves – a kind of magic show for cello and piano, and pure fun from first to last.

Chopin’s dazzling Polonaise brillante, which requires wondrous virtuosity from its players, employs a Polish dance form to embody the defiant soul of his then occupied and repressed homeland. Fauré’s famous Après un rêve, meanwhile, may seem a piece of pure romantic dreaminess, yet was written whilst France was still smarting from defeat in the Franco-Prussian War – in both cases, we can see why escaping into very different but equally fabulous other worlds might seem preferable to reality.