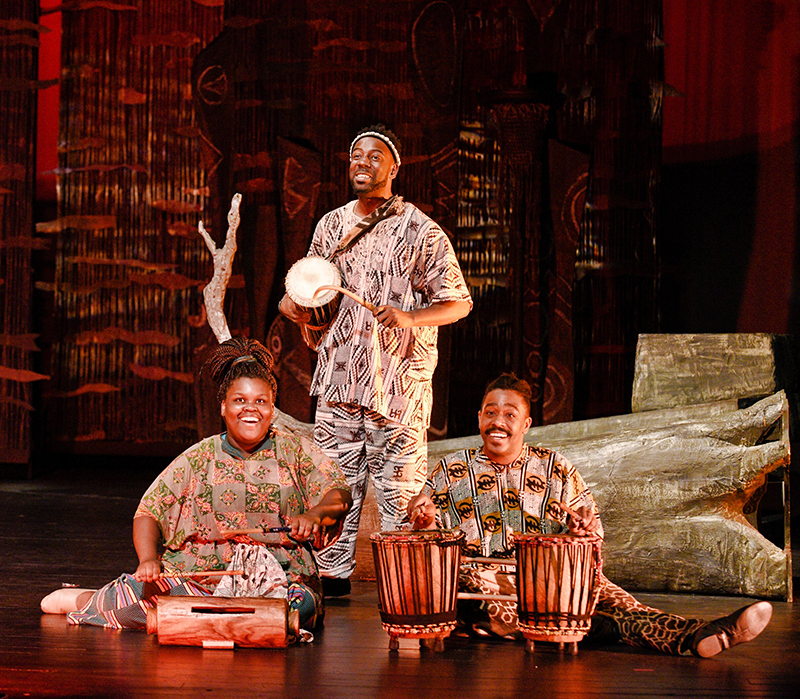 Brooklyn Center for the Performing Arts at Brooklyn College continues its 2016-17 family series on Saturday, April 29, 2017 at 2pm with the Dallas Children’s Theater production of Mufaro’s Beautiful Daughters: An African Tale.The adaptation is based on the Caldecott and Coretta Scott King Award-winning book by Brooklyn native John Steptoe. Tickets are $15 and can be purchased at BrooklynCenter.org or by calling the box office at 718-951-4500 (Tue-Sat, 1pm-6pm).

Adapted for the stage by Karen Abbott, from the original John Steptoe story,with music and lyrics by S-Ankh Rasa, Mufaro’s Beautiful Daughters: An African Tale tells a story about beauty that is more than skin deep. Audiences follow daughters Nyasha and Manyara as they journey through a mystical jungle to be presented to the king as possible wives. Along the way, the girls encounter a number of extraordinary situations designed to test their kindness, compassion and strength of spirit. Told with authentic African drumming, colorful staging, and powerful choreography, Mufaro’s Beautiful Daughtersunmasks the true meaning of beauty and celebrates the mystery and splendor of the African continent.

Robyn Flatt co-founded DCT in 1984 with start-up funds of $500. Under her artistic leadership, the theater’s creative and operational stature has grown over the past 30 years to reflect its current annual budget of more than $4 million. Her theatrical career has brought her acclaim as a professional director, actor, and lighting designer. During her tenure as a member of the Dallas Theater Center Resident Company, she served as Assistant Artistic Director and Director of Theater-in-the-Parks. She holds an MA Degree from Baylor University and studied with Etienne Decroux, Juana Laban, and Hanya Holm.

Ms. Flatt has served on the boards of AATE, ASSITEJ/USA, and CTFA. She is a recipient of The 500, Inc.’s prestigious Ken Bryant Visionary Award, Dallas Historical Society’s Excellence in Community Service for Creative Arts Award, the 2002 Leon Rabin Standing Ovation Award, and the Excellence in Nonprofit Management Award. Ms. Flatt is a member of the College of Fellows of American Theatre and recently served as Treasurer of the Children’s Theatre Foundation of America. In 2016, she was honored with the Orlin Corey Award for Artistic Excellence from the American Alliance for Theater and Education.

At age 12, S-Ankh Rasa was the youngest student accepted to the University of California, Berkeley Music Department. He composed his first symphony at 15 while attending the San Francisco Conservatory of Music. At 16, he performed at the Monterey Jazz Festival as a featured saxophonist with Dizzy Gillespie and the Modern Jazz Quartet. In Los Angeles, he worked as a studio musician (saxophone, flute, and clarinet), composer, arranger, and musical director with Marvin Gaye, Stevie Wonder, Natalie Cole, and many others. He retired from the LA music scene and began studying traditional African music. This led to a U.S. tour with the world-renowned African drummer, Mamady Keita. Mr. Rasa is also a performer and historian of the Mandinko kora (African harp) and composes and sings in 3 languages. He worked with acclaimed actress, playwright, and director Regina Taylor on the Dallas’ production ofCrowns in the vital role of multi-percussionist. He also performed in the U.S. tour of Crowns as co-Music Director and multi-percussionist under the direction of Andrea Frye. His other Dallas area credits include the composition of original scores for Cara Mia Theatre Company’s productions of Romeo and Juliet and Lorca’s Blood Wedding. He was also the musical director/composer of DCT’s productions of Anansi – The Spider Man and The True Story of the 3 Little Pigs. Mr. Rasa is currently composing a one-man original score forCrystal City 1969 directed by David Lozano for Cara Mia Theatre Company.

Dallas Children’s Theater was founded in 1984 by Robyn Flatt and Dennis Vincent, in response to the growing need for professional family theater. A 501(c) 3 non-profit organization, they are a forum for artistic collaboration, a vital educational resource for metropolitan schools, and a vehicle of enrichment for the greater Dallas community. With a multi-million-dollar budget and a national audience, Dallas Children’s Theater is the largest professional family theater in the Southwest. They offer a season of eleven productions in our newly renovated Rosewood Center for Family Arts, as well as a national touring company, theater academy, and “arts-in-education” programs for local schools. Recognized by Time Magazine as one of the top 5 children’s theater companies in the US, and the only one of that group to tour nationally, Dallas Children’s Theater travels coast to coast with professional large-scale productions designed to stir the heart, stretch the mind and promote education. Dallas Children’s Theater has been designated an American Masterpieces Touring Artist by the National Endowment for the Arts.