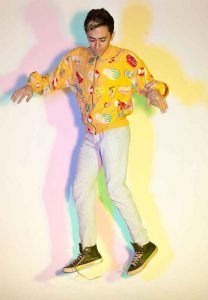 Baruch Performing Arts Center presents a work-in-process, More Forever, by Caleb Teicher & Company, a collaboration with Conrad Tao, at Baruch Performing Arts Center, 55 Lexington Avenue (25th Street between Third and Lexington Avenues), NYC on Friday, May 18, 2018 at 7:30pm. Tickets are $20 ($10 for students) and are available at www.baruch.cuny.edu/bpac.

Caleb Teicher & Company continues their investigation of American dance traditions on a stage filled with a thin layer of sand. Using vernacular jazz, tap dance, and Lindy Hop with a new contemporary score for piano and electronics by Conrad Tao, this work-in-process sonic journey will brush away the fine line between movement and music and expand the expressive capacity of American music and dance. Teicher is joined by six additional dancers:  Nathan Bugh, Evita Arce, Byron Tittle, Gabriel Winns Ortiz, Brittany DeStefano, and Macy Sullivan, with Tao providing music at the piano with electronics. The evening includes a discussion between Tao and Teicher about their collaboration and creative process.

CT&Co’s signature elements of musicality, humor, and warmth have won the hearts of audiences by connecting to America’s rich and diverse physical heritage, whether tap dancing to Bach or swing dancing to Chet Baker, playing patty-cake to Sufjan Stevens or ballroom dancing to Ella Fitzgerald. Past engagements include Jacob’s Pillow Dance Festival’s Inside/Out Series, Gibney Dance, Queens College/Kupferberg Center for the Arts (through CUNY Dance Initiative), The Yard on Martha’s Vineyard, LaMaMa Experimental Theater Club, and the American Tap Dance Foundation, among others.

“He’s engaging, and yet you watch him with perpetual curiosity.”

Teicher was named one of Dance Magazine’s 2012 “25 to Watch” and, recently, the winner of Dance Magazine’s “Best Emerging Choreographer” in the 2016 Readers’ Choice Awards. He has been featured in Vogue, Interview Magazine, Dance Magazine, Dance Spirit Magazine, and many other publications. Caleb has been a guest faculty member at Steps on Broadway and Broadway Dance Center in New York City. He also spends time as a guest soloist, a director/choreographer for interdisciplinary work, and as an instructor of tap dance and solo jazz for international festivals/workshops.

Conrad Tao has appeared worldwide as a pianist and composer, and has been dubbed a musician of “probing intellect and open-hearted vision” by the New York Times, a “thoughtful and mature composer” by NPR, and “ferociously talented” by TimeOut New York. In June of 2011, the White House Commission on Presidential Scholars and the Department of Education named Tao a Presidential Scholar in the Arts, and the National Foundation for Advancement in the Arts awarded him a YoungArts gold medal in music. Later that year, Tao was named a Gilmore Young Artist, an honor awarded every two years highlighting the most promising American pianists of the new generation. In May of 2012, he was awarded the prestigious Avery Fisher Career Grant.

Tao’s career as composer has garnered an eight consecutive ASCAP Morton Gould Young Composer Awards and the Carlos Surinach Prize from BMI. In the 2013-14 season, while serving as the Dallas Symphony Orchestra’s artist-in-residence, Tao premiered his orchestral composition, The world is very different now. Commissioned in observance of the 50th anniversary of the assassination of President John F. Kennedy, the work was described by the New York Times as “shapely and powerful.” Most recently, the Chamber Orchestra of Philadelphia commissioned a new work for piano, orchestra, and electronics, An Adjustment, which received its premiere in September 2015 with Tao at the piano. The Philadelphia Inquirerdeclared the piece abundant in “compositional magic,” a “most imaginative [integration of] spiritual post-Romanticism and ’90s club music.”

Tao was born in Urbana, Illinois, in 1994. He has studied piano with Emilio del Rosario in Chicago and Yoheved Kaplinsky in New York, and composition with Christopher Theofanidis.

Past presentations have included theatre companies such as the National Asian American Theatre Company, Folksbiene, and MCC. The world premiere of the opera The Echo Drift as part of the Prototype festival. Dance companies such as Heidi Latsky Dance, José Limón, and Urban Bush Women. BPAC is the New York home of the Alexander String Quartet and presents a rich chamber music season including ensembles such as the Israeli Chamber Project and pianists Sara Davis Buechner and 2018 Lincoln Center Emerging Artist, Michael Brown. BPAC offers a jazz series named for bassist Milt Hinton, which has featured artists such as Grammy-Award winner Vince Giordano and the Nighthawks. Discussion program have included writers Teju Cole, Colum McCann and Amitav Ghosh, actress Linda Lavin, and thought leaders such as Gloria Steinem and U.N. Secretary General Kofi Annan. Visit www.baruch.cuny.edu/bpac for complete and up-to-date information on the 2017-18 season.

Caleb Teicher & Co.’s residency at Baruch Performing Arts Center is part of the CUNY Dance Initiative (CDI), which receives major support from The Mertz Gilmore Foundation, the Howard Gilman Foundation, and the Stavros Niarchos Foundation. Additional support is provided by the Jerome Robbins Foundation, the SHS Foundation, and the Harkness Foundation for Dance. CDI is spearheaded and administered by The Kupferberg Center for the Arts at Queens College. www.cuny.edu/danceinitiative