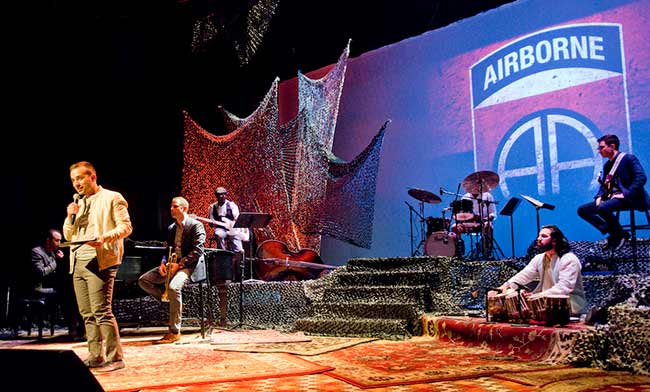 A Theatrical Presentation Of A Combat Soldier’s Journey, To Make Its New York City Debut

At The Sheen Center’s Loreto Theater

“Modern Warrior offers an innovative and compelling approach of communicating that Post Traumatic Stress can result in Post Traumatic Growth, while reminding us that freedom isn’t free.”

“Modern Warrior reminds veterans they are not victims and can use their experiences to grow and make significant contributions to society.”

[NEW YORK, NY – January 2, 2018] – Modern Warrior Live, a theatrical music experience co-created by United States Army Veteran Jaymes Poling and musician Dominick Farinacci, will make its New York City debut on Saturday, January 13 and Sunday, January 14, 7:30 p.m. in the Loreto Theater at the Sheen Center for Thought & Culture, 18 Bleecker Street. The show explores the psychological weights of war, the challenges of reintegration as a civilian, and the potential for positive personal and communal growth. Through one combat veteran’s unapologetic story, Modern Warrior highlights how post-traumatic stress can be a precursor to growth.

Taking place during the Association of Performing Arts Professionals (APAP) conference, the production follows months of preparation capped by recent performances in Cleveland, OH, Chicago, IL and Easton, MD, which have generated an outpouring of support from audiences (97% 5-star fan reviews on Facebook), veterans, and media observers. Stefani Schaefer, Emmy-Award Winning Anchor at Fox 8 News Cleveland, noted, “It’s an incredibly moving journey of a soldier’s story experienced through words and music… I was absolutely moved to tears by the powerful story, emotional journey, and breathtaking music.”

The Modern Warrior initiative builds bridges between veteran and civilian communities through live performances, collaborative workshops, and informative panel discussions. Focused on stories of post-traumatic growth, the team aims to help destigmatize our veterans’ experiences through a deeper understanding from the community and by providing inspirational hope for all.

“By focusing on the relatable human experiences, we are able to build and strengthen commonalities between the civilian and veteran communities. This gives us a common starting point as we work to combat social implications of the PTS stigma, encourage communication between veterans and their loved ones and explore pathways to Post-Traumatic Growth,” stated co-creator Poling.

Concerning the integration of his composed score and the accompanying arrangements, Farinacci adds, “Music is an expression of the human condition and has always been that common ground between communities. Bringing together a powerful story through the lens of music, we want to help develop a better informed and empathetic community, nurturing a deeper culture of support.”

The United War Veterans Council, an organization dedicated to honoring, supporting, and serving America’s veterans, and producer of the New York City Veterans Day Parade, is also a presenting sponsor. UWVC Executive Director Mark Otto noted, “We are honored to partner with Modern Warrior to help bring awareness to PTS while at the same time, recognizing the potential for growth in adversity. Modern Warrior offers an innovative and compelling approach of communicating that Post-Traumatic Stress can result in Post-Traumatic Growth, while at the same time reminding us that freedom isn’t free.”