“Known for mounting choral extravaganzas with singers from around the world … the chorus … produced a ravishing sound.” – The New York Times, review of DCINY’s 2012 Messiah

New York, NY … Distinguished Concerts International New York (DCINY) kicks off the Christmas music and Messiah season with their 3rd annual performance of Sir Thomas Beecham/Sir Eugene Goossens’s 1959 re-orchestration of Handel’s Messiah for full symphony orchestra. Also featuring a mass chorus, DCINY’s Messiah will ignite Avery Fisher Hall with glorious music on Sunday, December 1 at 2:00pm. The New York Times declared DCINY’s Messiah chorus to be “ravishing” and New York Concert Review said, “Make no mistake; this is not your great-grandfather’s Messiah. It is brash, extroverted, and at times bombastic … double the sound, new and improved, with cymbals and triangle! This version is tailor-made for DCINY; an organization that never fails to pull out all the stops in putting on a big show.”

In 1959, Sir Thomas Beecham, founder and music director of London’s Royal Philharmonic Orchestra (RPO), commissioned Sir Eugene Goossens to orchestrate Messiah for the full-forces of a modern symphony orchestra. After completing the commission – thus supposedly saving the treasured work from oblivion – the new Goossens orchestration was performed live at the Lucerne Festival in Switzerland and recorded by the RPO. Soon afterwards, however, the score and parts were “lost” and no other live performances of the work were presented in Europe or in the United States. The RCA Red Label recording remains one of the top ten most popular Messiah recordings of all time. Join DCINY for what has now become a holiday tradition and lend your voice to the famous Hallelujah! 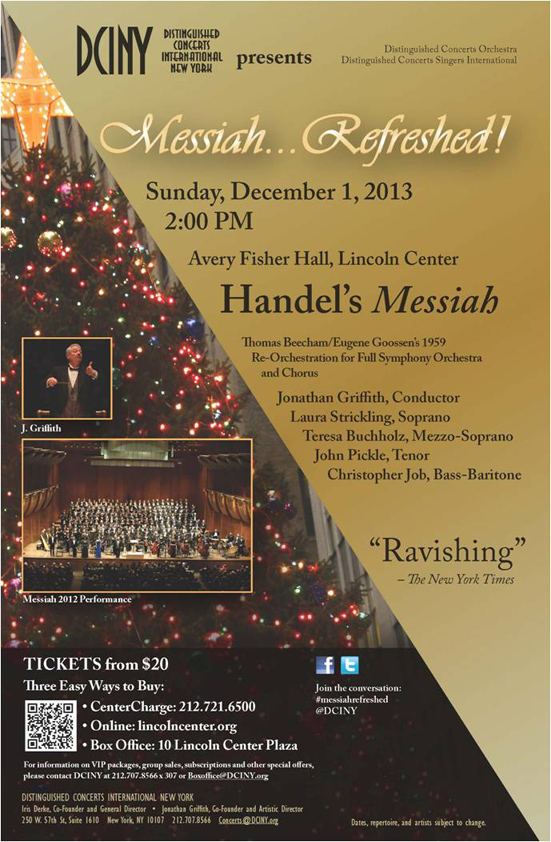