by the Martina Arroyo Foundation 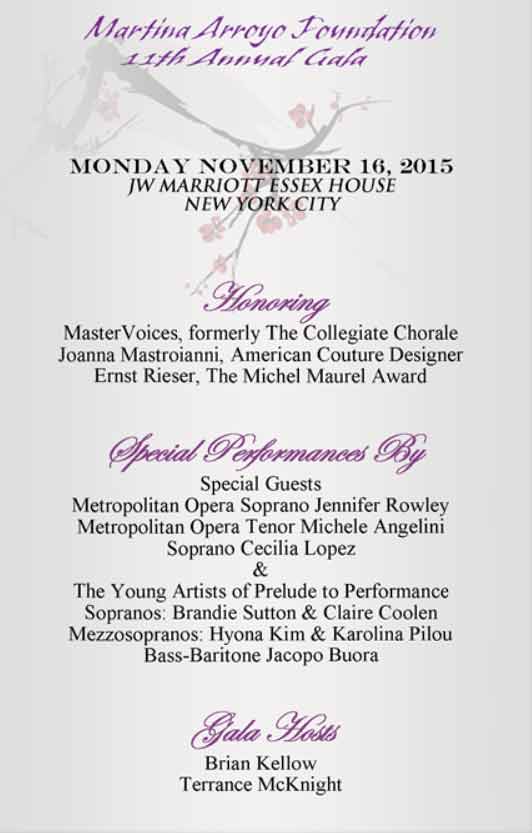 New York, NY (November 6, 2015) – MasterVoices, formerly The Collegiate Chorale, will be honored at the Martina Arroyo Foundation’s 11th Annual Gala.MasterVoices will be recognized along with American couture designer Joanna Mastroianni and The Michel Maurel award-winner Ernst Rieser. Brian Kellow and Terrance McKnight will host the gala, with performances by the young artists of Prelude to Performance, Michele Angelini (featured in the October issue of Opera News), as well as other special guests.

The Gala Dinner Program will feature a Live Auction, and musical selections, including:

The mission of the Martina Arroyo Foundation is to counsel young singers in the interpretation of complete roles for public performances. The Foundation guides each singer in the preparation of an entire operatic role through a formal educational process that includes the background of the drama, the historical perspective, the psychological motivation of each character, and language proficiency.

American soprano Martina Arroyo has received numerous awards and accolades for her long-standing pre-eminence at the world’s foremost opera houses and concert halls, including a 2013 Kennedy Center Honors and a 2010 Opera Honors Award from the National Endowment for the Arts. She continues to make an invaluable contribution to the art form through her teaching and her commitment to young artist development through the Martina Arroyo Foundation. Born in 1937 and raised in Harlem, Arroyo went on to conquer the opera world, from the Metropolitan Opera to the Vienna State Opera, Teatro Colón in Buenos Aires to La Scala in Milan, Paris Opera to the Royal Opera House at Covent Garden, and the great concert halls from Salzburg and Berlin to her hometown of New York. She has had the honor of three opening night performances at the Met, two of them in consecutive seasons. Few in her generation have been so fearless or so successful across the repertory, from Mozart, Verdi, Puccini and Strauss to Barber, Bolcom, Schoenberg, and Stockhausen. The New York Times once heralded her voice as “among the most glorious in the world.” Her extensive recorded legacy reflects her inspired collaborations with conductors Leonard Bernstein, Karl Böhm, Rafael Kubelík, Zubin Mehta, Thomas Schippers, Colin Davis, and James Levine. Arroyo studied to be a teacher and graduated from Hunter College at the age of 19. In 1958, she auditioned for and won the Metropolitan Opera’s Auditions of the Air, which gave her a chance to study both music and acting at the Met’s Kathryn Long School. She made her Carnegie Hall debut in 1958 in the American premiere of Ildebrando Pizzetti’s Murder in the Cathedral, and in 1965 stepped in as a last-minute replacement for an ailing Birgit Nilsson in Aïda at the Met, a career-changing moment. Over the years and in nearly 200 performances at the Met, Arroyo performed all the major Verdi roles that would be the core of her repertory, in addition to Mozart’s Donna Anna, Puccini’s Cio-Cio-San and Liù, Mascagni’s Santuzza, Ponchielli’s Gioconda, and Wagner’s Elsa. Her 1968 London debut came in a concert version of Meyerbeer’s epic Les Huguenots, followed the same year by her Covent Garden debut in Aïda. Her debuts at Paris Opera, La Scala and the Teatro Colón followed in close succession. In 2003, Arroyo established her own non-profit cultural organization. Now celebrating its tenth anniversary season, the Martina Arroyo Foundation provides new generations of emerging young artists with the tools to pursue careers in opera, by means of two intensive programs of study, coaching, and performance that focus on immersive preparation of complete operatic roles.

Brian Kellow is the author of Pauline Kael: A Life in the Dark, which was a 2011 New York Times Notable Book of the Year and also appeared on the Best of the Year lists of Entertainment Weekly, The New Yorker and the Chicago Tribune. He is also the author of Ethel Merman: A Life, The Bennetts: An Acting Family, and the coauthor of Can’t Help Singing: The Life of Eileen Farrell. He is the features editor of Opera News. Kellow lives in New York City.

Terrance McKnight is the WQXR weekday evening host. He also hosts the Saturday evening program, All Ears with Terrance McKnight, a show about musical discovery, which was honored with an ASCAP Deems Taylor Radio Broadcast Award in 2010. McKnight’s musical experiences – from glee club soloist and accomplished pianist, to professor at Morehouse College, and finally as producer and host of several music programs for public radio – have consistently juxtaposed the European Classical tradition alongside American classic traditions – jazz, gospel, African American spirituals and other musical genres. McKnight was first heard in New York in 2008 when he joined the staff of WNYC. He moved to WQXR in October 2009. Previously he worked at Georgia Public Broadcasting, where he was creator, producer and host of Studio GPB, a program that introduced a wide array of musical artists through interviews, live studios sessions and commercial recordings.

Joanna Mastroianni launched her signature collection with a clear vision of modern, fashion forward women. She has consistently created collections that reflect her innate sense for sophistication, elegance, and timeless beauty. While still a student at F.I.T, Mastroianni’s vision and passion for beautiful   fashion raised the attention of Henry Bendel, giving her a first order. Bergdorf Goodman featured in their windows, her premier collection under her signature label. Her black matte jersey illusion dress, from her very first collection, made it into two movies; worn by Michelle Pheiffer in Tequila Sunrise and by Melanie Griffith in Bonfire of the Vanities. Mastroianni’s works in the tradition of Haute couture, each garment is engineered and constructed carefully using the finest of fabrics. Her original embroideries and imaginative accessories are modern and bold, creating versatile, wearable and luxurious collections that make women look and feel glamorous and feminine. Her inspirations are unpredictable, often starting with a minute detail that she develops and expands into a full-fledged collection that is shown on the runway. Passion is apparent in every detail she creates and in every project she is involved in. Joanna Mastroiani’s audience is global, dressing some of Hollywood’s elite: Eva Longoria, Christina Ricci, Beyonce, Alicia Keys, Panda LaKshmi, Carol Alt. From the Academy, Tony, and Grammy awards, to dressing Sarah Jessica Parker, Cynthia Nixon and Kristin Davis for Sex and the City.

MasterVoices is continuing The Collegiate Chorale’s preeminent reputation for its performances of the traditional choral repertoire, rarely heard operas in concert, unusual music theatre pieces and commissioned works. The chorus has worked with the great luminaries of the music world, singing under conductors such as James Levine, Alan Gilbert, Zubin Mehta and Riccardo Muti. MasterVoices has performed in recent seasons with renowned vocal artists, including Stephanie Blythe, Victoria Clark, Bryn Terfel, Thomas Hampson and Deborah Voigt. Highlights of recent seasons have included Arrigo Boito’s Mefistofele, David Lang’s battle hymns, Not the Messiah (He’s a Very Naughty Boy) with Eric Idle and the U.S. premiere of Kurt Weill’s The Road of Promise. MasterVoices is committed to fostering the talents of the next generation of artists and audiences through its Side-by-Side mentoring program, student masterclasses, Faith Geier Artist Initiative and most recently with the launch of Bridges, its outreach program creating new works in collaboration with communities throughout New York City. For more information, visit mastervoices.org. Connect with MasterVoices on Facebook, Twitter and Instagram (@mastervoicesny).