With Music by Victor Herbert and Libretto by Glen MacDonough

with MasterVoices and Orchestra of St. Luke’s 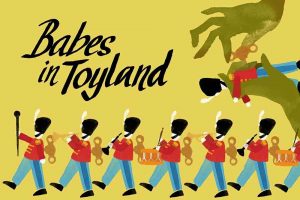 A huge hit when it premiered in New York in 1903, Victor Herbert’s Babes in Toyland hasn’t seen a major revival in New York City in over 85 years. Full of glorious melodies, Babes in Toyland tells a story that is both amusing and scary: villainous Uncle Barnaby plots the deaths of his young niece and nephew, Alan and Jane, in order to gain their inheritance. After many twists and turns, the siblings, with the help of several Mother Goose characters, thwart his efforts and bring happiness back to Toyland. MasterVoices will present the original score in its full orchestration, including beloved songs “Toyland”, “March of the Toys”, and “I Can’t Do the Sum”, giving the audience a rare chance to experience this musical extravaganza afresh. Recommended for ages 8 and up.

“Victor Herbert was by far the most popular and successful composer in America at the turn of the 20th Century – not just ‘Andrew Lloyd Webber successful,’ but ‘Beatles popular!’ His music for Babes in Toyland is widely considered among his very best, with familiar titles like “Toyland” and “March of the Toys”, and also stirring instrumental pieces to accompany shipwrecks, attacks by giant spiders, and the making of deadly potions. For MasterVoices’ revival, we are debuting several musical numbers that were cut on the road to Broadway. As James Lapine and Stephen Sondheim did many years later with Into the Woods, librettist Glen MacDonough and Victor Herbert invent two new characters, in this case the siblings Alan and Jane, as the protagonists who interact with familiar Mother Goose characters, including Contrary Mary, Tom-Tom the Piper’s Son, Jack and Jill, Little Bo-Peep, and Mother Hubbard.” – Ted Sperling, Artistic Director

Babes in Toyland tickets ($20-$150) are available at Carnegie Hall (carnegiehall.org | CarnegieCharge 212-247-7800 | Box Office at 57th and Seventh).MasterVoices Members are entitled to ticket discounts. For tickets and more information, visit mastervoices.org.