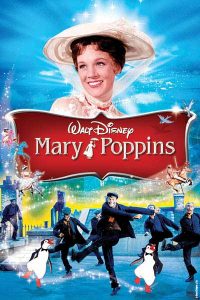 Schimmel Center at Pace University presents Mary Poppins Sing-Along on Sunday, February 10, 2019 at 4:00 pm, with pre-show activities beginning at 3pm. Tickets start at $20 and can be purchased online at  http://schimmelcenter.org/event/mary-poppins-sing-along, or by phone at 212-346-1715, or by visiting the Schimmel Center Box Office at 3 Spruce Street, New York. (Hours: Tuesday – Saturday, Noon – 5pm & three hours prior to each performance, through intermission.)

Disney’s original Mary Poppins was the winner of five Academy Awards, including Best Actress (Julie Andrews), Best Song (“Chim Chim Cher-ee”), and Best Visual Effects. “Practically perfect in every way,” Mary Poppins (Julie Andrews) flies out of the windy London skies and into the home of two mischievous children. With the help of a carefree chimney sweep named Bert (Dick Van Dyke), the spirited nanny turns every chore into a game and every day into a “Jolly Holiday.” Sing along to the original film, the precursor to this winter’s Mary Poppins Returns, starring Emily Blunt and Lin-Manuel Miranda.

Pre-show activities begin at 3pm and include games and a meet-and-greet withwith actors dressed as Mary Poppins and Bert.

This film screening and sing-along is part of Schimmel Center’s Family Programming.

This season, we are excited to offer an array of world premieres and inaugural events, from the first annual Crossing Bridges Music Fest, that celebrates traditional and modern Americana with contemporary singer-songwriters and legacy artists, to a modern premiere dance piece calling glenn by Ate9 with music composition and percussion by Wilco’s Glenn Kotche, to the premiere of Fearless: B-Sides with Hamilton’s Mandy Gonzalez.

We are building on the success of our comedy series by adding more artists to the lineup, including veteran comedians Caroline Rhea and Louie Anderson and rising star Hari Kondabolu. You won’t want to miss Comedy Central’s The Daily Show’s Ronny Chieng and Dulcé Sloan.