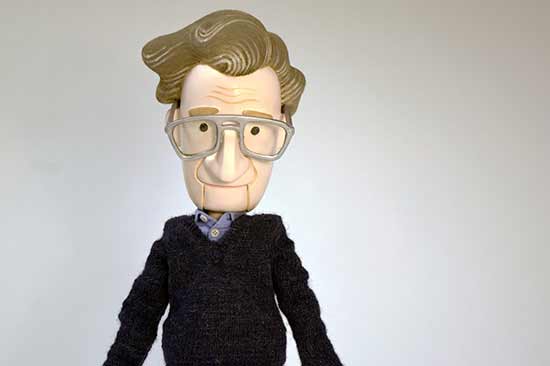 Manufacturing Mischief is a satirical play by Pedro Reyes that features puppet characters based on Noam Chomsky, Karl Marx, Ayn Rand, Elon Musk and Tiny Trump. The work was conceived as part of Reyes residency as the inaugural Dasha Zhukova Distinguished Visiting Artist at the MIT Center for Art, Science & Technology. It deals with issues of technology, ideology and the current political climate from a critical perspective, while also serving as entertainment and speaking both to scholars and a broader audience alike.

Brilliant American linguist Noam Chomsky is headed to a Silicon Valley convention to judge a competition for new Artificial Intelligence devices. Chomsky is stunned to find one of his prized students (from his days as a professor at MIT), Millie, has a device entered into the competition. Chomsky then finds the competition is hosted by none other than South African inventor, Elon Musk, who mysteriously summoned Chomsky to the convention. Millie’s device is called the Print-A-Friend, and works by materializing the author of any book inserted into it. Chaos ensues, as Ayn Rand, a tiny version of Donald Trump, Karl Marx, and others, are reanimated, and the Print-A-Friend is stolen! Noam Chomsky, his loyal and brilliant student Millie, and Karl Marx must fend off the forces of capitalistic evil and the damage they might do with this new AI machine. Current events, politics, science, morality, and cats collide in this silly, farcical puppet play.

PEDRO REYES (Artist) is a widely celebrated multi-platform artist, activist and educator based in Mexico City. He uses all aspects of visual art and education to address political and social issues. One of his main commitments is using the arts to reduce gun violence. In 2008, Reyes commenced Palas por Pistolas. The program collected over 1,527 guns donated from Mexican citizens, melted them down into 1,527 shovels, and then gave them to various schools and art institutions, which in turn used them to plant 1,527 trees. The program’s success garnered attention from the Mexican government, which donated 6,700 weapons that Reyes converted into musical instruments. As part of this pacifist effort, he created Amendment to the Amendment, a traveling workshop where US citizens take part in a rewrite of the Second Amendment. Last year, he was one of 13 artists included in the Ford Foundations The Art of Change fellowship program. His work Doomocracy was presented by Creative Time at the Brooklyn Army Terminal in 2016.

PAUL HUFKER (Playwright) has been an AEA actor, playwright and director in NYC for over 12 years. He is a proud graduate of Brooklyn College’s MFA playwriting program, under Mac Wellman and Erin Courtney. In the fall of 2017, Paul wrote the script for Pedro Reyes’ massive art installation in Brooklyn entitled Doomocracy, also directed by Meghan Finn. He is a 2016 Great Plains Theatre Conference invited playwright, a 2015 and 2016 Himan Brown Award winner (through Brooklyn College), a 2016 O’Neill Conference semi-finalist, a 2016 American Theatre in Higher Education Excellence in Playwriting Award finalist, a 2015 Jerome Fellowship finalist, a 2014 Princess Grace Award semi- finalist, and a 2011 O’Neill Conference semi-finalist. His plays have been produced in NYC, throughout the US, and in Toronto, Canada. He is currently the adjunct professor of Undergraduate Playwriting at Brooklyn College, and a proud graduate of Webster University where he received his BFA in theatrical performance.

MEGHAN FINN (Director) joined The Tank as Co-Artistic Director in April of 2017. Recent credits include: DOOMOCRACY by artist Pedro Reyes for Creative Time at the Brooklyn Army Terminal. Sam’s Tea Shack by Ben Gassman and Sam Soghor (The Tank and Barker Room Rep), The Offending Gesture by Mac Wellman (The Tank/3LD at the Connelly Theater NYTIMES’ and TIMEOUTNY CRITICS’ PICK); American Power performed by photographer Mitch Epstein and Composer/Cellist Erik Friedlander at the V&A London and The Wexner Center, Columbus, Ohio; Gary Winter’s DAREDEVIL at The Brick; The Downtown Loop by Ben Gassman (3LD/3D+ Productions/Teeth of Tooth Atelier); Take Me Home by Alexandra Collier set in a taxi cab (Incubator Arts Project/LPR). Other recent credits include: The Service Road by Erin Courtney (Adhesive Theater Project/NYTIMES Critics’ Pick), Motel Cherry by Peggy Stafford (Summerworks Clubbed Thumb/New Georges HERE Arts Center Huffington Post Top 10 of 2012) and 3 2’s; or AFAR by Mac Wellman (Dixon Place), Relative Value by Jesse Longman (3LD), Saturn Nights by Jess Barbagallo (Incubator Arts Project), Waltz by Corina Copp (CSC -Weasel), Blue Dress Reduction featuring Eliza Bent (PS122), HIM by E.E. Cummings (Walkerspace), The Fake History of George the Last by Misha Shulman (the longest lunch/TNC), A Week at the NJ Shore by Valerie Work (the longest lunch/The Bushwick Starr, and others).  Finn holds an MFA in Directing from Brooklyn College and a BA in Theater from the University of Southern California. She was a member of the 2009 Lincoln Center Director’s Lab, 2009/10 Soho Rep Writer/Director Lab, New Georges’ The Jam, a 2014 & 2016 New Georges Audrey Resident and co-founder of the longest lunch (2002-present).

The Tank is a non-profit arts presenter serving emerging artists engaged in the pursuit of new ideas and forms of expression. We serve over 2,000 artists every year in over 400 performances, and work across all disciplines, including theater, comedy, dance, film, music, public affairs, and storytelling. Our goal is to foster an environment of inclusiveness and remove the burden of cost from the creation of new work for artists launching their careers and experimenting within their art form. The heart of our services is providing free performance space in our 98 seat proscenium and 56 seat blackbox that we operate in Manhattan, and we also offer a suite of other services such as free rehearsal space, promotional support, artist fees, and much more. We keep ticket prices affordable and view our work as democratic, opening up both the creation and attendance of the arts to all.

Manufacturing Mischief is a fully produced coproduction with The Tank. Past Tank produced-work includes Drama Desk-nominated productions Ada/Ava (2016), youarenowhere (2016), The Paper Hat Game (2017), and the ephemera trilogy (2017), as well as New York Times Critics’ Pick The Offending Gesture by Mac Wellman, directed by Meghan Finn (2016). Since its founding in 2003, artists who have come through The Tank include Alex Timbers, Amy Herzog, Lucy Alibar, Mike Daisey, Reggie Watts, Kyle Abraham, Andrew Bujalski, We Are Scientists, and tens of thousands of others. www.thetanknyc.org