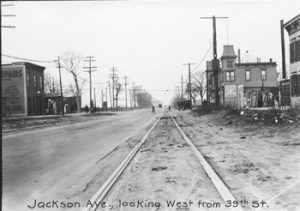 Making Movie Magic: How 1920s Astoria Came to Life in Filming The Great Gatsby in 2013

(Roosevelt Island, New York, January 6, 2015) — One of the challenges facing Baz Luhrmann in his 2013 cinematic remake of the classic The Great Gatsby by F. Scott Fitzgerald was how to recreate 1920s Queens. Robert Singleton, Executive Director of the Greater Astoria Historical Society, will describe the behind-the-scenes research and movie magic in a lecture sponsored by the Roosevelt Island Historical Society, on Tuesday, January 20 at 6:30 PM, at the New York Public Library Branch on Roosevelt Island.

Mr. Singleton will discuss the pivotal role that the Greater Astoria Historical Society played in evoking the bygone era. The Society was a credited historical advisor on the film, which won the 2014 Academy Award for Best Production Design.

The event is FREE and open to the public. It is the first in a series of spring lectures sponsored by the Roosevelt Island Historical Society.

DIRECTIONS: Take the Tram at 59th Street and Second Avenue or the F train to Roosevelt Island. Take the free red bus or walk eight minutes north to the library at 524 Main Street.

The Roosevelt Island Historical Society promotes awareness of our Island’s unique story and pursues preservation of its landmarks and artifacts. For more information, please visit www.rihs.us.