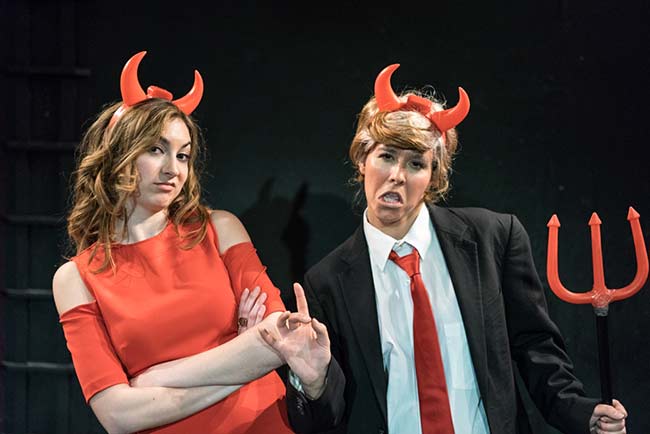 FRIGID New York @ Horse Trade in association with Something from ABroad will present Make Christmas Great Again, a holiday themed comedy written by Martha Lorena Preve-Ayora and directed byPaloma De Vega Centenera. The show will receive a limited run at The Kraine Theater (85 East 4th Street between 2nd Avenue and Bowery) December 11-13 with performances on Monday, December 11 at 7pm, Tuesday, December 12 at 7pm, and Wednesday, December 13 at 7pm. Tickets ($20) may be purchased in advance at www.horseTRADE.info. The performance will run approximately 60 minutes, with no intermission.

Desperate times call for desperate measures. Satan has come to power and rules the free world. An angel sent by God will announce to Maria, a young Mexican girl that she is to become the mother of the savior, a Hispanic savior. This comedy about religion, politics and immigration will make you laugh in these dark times.

Make Christmas Great Again is a type of Mexican play called “Pastorela”. A “Pastorela” has always the same structure; it takes the Nativity story and its characters and gives it a comic and political twist according to the current events of the world.

Martha Lorena Preve-Ayora (Playwright) is a Mexican film and theater actress who has studied acting in Mexico and New York. She started Something from ABroad to be able to share her traditions in New York City. She worked as a director in the company’s productions: Dog Sees God and Not Another Christmas Story(which she also wrote). Her script A Night With the Dead was recently staged at The Kraine Theater.

Paloma de Vega, (Director) is a dancer, actress, singer and choreographer. She studied in “Real Conservatorio Profesional de danza” and in New York Film Academy Recent credits include Jesus Christ Super Star with The World Voice Ensemble and The Miracle of Christmas. She works as a dancer and choreographer in Surati for Performing Arts. She recently directed and choreographed the company’s latest production, A Night With the Dead.

Something from ABroad produces material from a variety of cultural backgrounds to give stories from abroad a voice in today’s America. We are a theater company started by a couple of “broads” from abroad. We are proud to promote art created by women. Our mission is to provide an opportunity for actors from all over the world to perform on a stage in New York. We tell the stories of our people and our struggles as immigrants. We embrace the differences that an international ensemble brings to the table, and we make this diversity our strength.