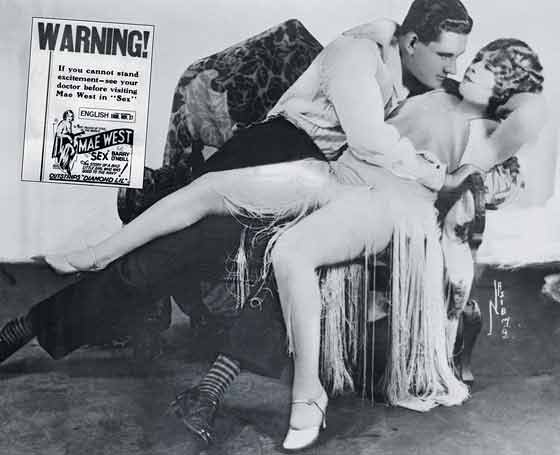 Born in Brooklyn, NY on August 17, 1893, MAE WEST began performing at age 6. By 1925, the 32-year-old knew her career had capsized; she was cast only in minor roles, she had numerous negative reviews, and she’d been fired. Then a trip to Greenwich Village and an appearance at Jefferson Market Court (now Jefferson Market Library) — along with an overnight stay at Jefferson Jail — changed her life, making the controversial vaudevillian an overnight sensation.

Vintage NYC images punctuate this fascinating but little-known story about the legendary entertainer, some of which played out at 425 Sixth Avenue when it was the Third Judicial Courthouse.

Join us at 6:00 on Wednesday evening, August 17, 2016 to celebrate Mae’s birthday with a talk and slide-show by Greenwich Village historian LindaAnn Loschiavo featuring rare photos of the young variety artist, who toured as a “specialty dancer” before becoming a writer and going to Hollywood in 1932 for a minor role in Paramount’s “Night After Night.” Archival images of NYC vaudeville theatres, Greenwich Village, and Jefferson Market will be screened as you’ll be introduced to the company Mae kept such as Owney Madden, George Raft, Jack Dempsey, West 8th Street resident Texas Guinan, and many others.

Come up and see Mae on her birthday —  a festive occasion filled with fun, refreshments, prizes.

All events are free and open to the public.  Presented in the 1st floor Willa Cather Community Room.

About our speaker: Greenwich Villager LindaAnn Loschiavo, a historian and dramatist, drew inspiration from trials at Jefferson Market Court for her play “Courting Mae West.” Her latest projects are a documentary film, “In the Footsteps of Texas Guinan,” and a new biography on the queen of the night clubs, who lived at 72 Washington Square South and 17 West 8th Street until her death in 1933.