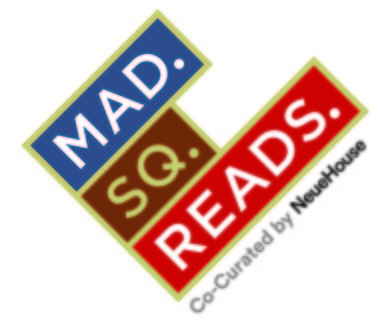 Given their proximity and shared interest in arts and community-oriented programming, NeueHouse and Madison Square Park Conservancy’s collaboration was a natural fit. With its co-curation of the Mad. Sq. Reads series, NeueHouse has expanded its already robust programming by bringing it outside its four walls and into the surrounding neighborhood. The series furthers NeueHouse’s mission to deliver a unique, interdisciplinary and imaginative cultural experience.

Valeria Luiselli was born in Mexico City and grew up in South Africa. Luiselli’s diverse background has allowed her artistic journey to stretch froma ballet libretto for the choreographer Christopher Wheeldon, performed by the New York City Ballet in Lincoln Center in 2010; a pedestrian sound installation for the Serpentine Gallery in London; and a novella in installments for workers in a juice factory in Mexico. Publishers Weekly called her recent novel, Faces in the Crowd, a “haunting debut novel. . . Luiselli plays with the idea of time and identity with grace and intuition.” Her book Sidewalks, a collection of essays, was also released this year.

As a Pulitzer Prize finalist, Tony Award Nominee, and 2006 MacArthur Fellowship recipient, Sarah Ruhl has taken her passion for poetry and changed the game for the contemporary playwright, as the New York Times says, “in a poised, crystalline style about things that are irrational and invisible.” Ruhl’s new book 100 Essays I Don’t Have Time to Write: On Umbrellas and Sword Fights, Parades and Dogs, Fire Alarms, Children, and Theater, a vibrant, provocative examination of the possibilities of the theater, will be available starting on September 2, 2014.

Sean Wilsey is the author of Oh the Glory of It All, which the New York Times hailed as a “funny-tender-raucous epic of a memoir.” In July he published More Curious, a collection of essays and journalism which includes a profile of the restaurateur Danny Meyer. He is at work on another memoir, I Am in Love, about, among other things, his experiences as an apprentice gondolier in Venice, Italy. For many years he was the editor-at-large for McSweeney’s Quarterly Concern, and on the staff of the New Yorkermagazine. Wilsey was born in San Francisco, in 1970, and lives in Marfa, Texas.

NeueHouse is the world’s first private work collective in which one’s place of business is also an environment for learning, inspiration, collaboration and hospitality. Expressed in a unique design language balancing art and industry, NeueHouse is a series of spaces, experiences and amenities especially suited to ambitious innovators. The first NeueHouse in New York is housed across five floors of a 1913 renovated industrial building with ceilings up to 20 feet and integrates the raw grandeur of the industrial setting with furnishing that reflect a non-corporate, personal and domestic sensibility. NeueHouse New York has a number of exceptional spaces and services including a private screening room, broadcast and recording facilities and private dining rooms available to members and select partners.