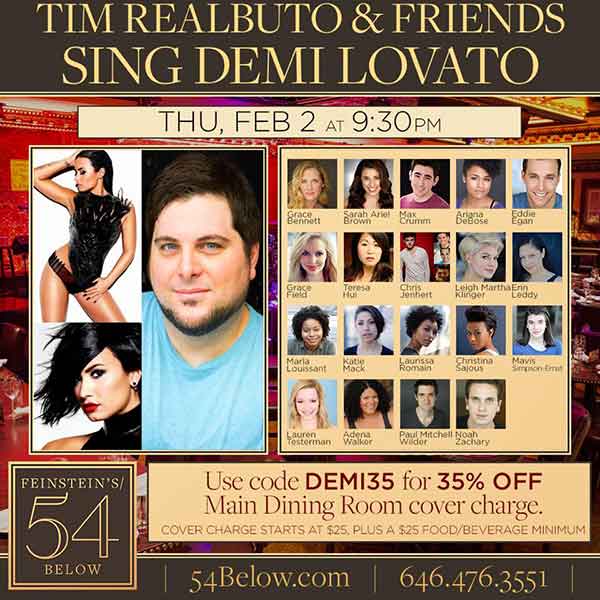 ‘Made Of Glass’ Concert at Feinstein’s/54 Below

Tim Realbuto Will Bring New Concert ‘Made Of Glass’ To Feinstein’s/54 Below Next Month Celebrating The Music Of Music Of Demi Lovato And Benefitting The Save The Music Foundation; Special Broadway Guests Will Join Him

Fresh off of his critically acclaimed run as Patrick Ness in the new Off-Broadway production of ‘YES’ at The Manhattan Repertory Theatre, frequent New York concert staple and 2016 Thespis Award Nominee Tim Realbuto will return to Feinstein’s/54 Below for the first time since 2014. In his all new show Tim Realbuto: Made of Glass, Realbuto and friends will sing the tunes of pop superstar Demi Lovato. But don’t expect to hear your favorite typical arrangements. Realbuto, longtime musical director Julianne B. Merrill, and ‘Ghostlight’ collaborator Matthew Martin will arrange many of Ms. Lovato’s greatest hits to sound more jazzy and Broadway in style (although many of Lovato’s classics will remain the same).

Here’s how the evening is billed, according to the 54 Below website:

“Join Feinstein’s/54 Below and award winning performer and composer Tim Realbuto as they honor the music of multi-platinum recording artist and pop icon Demi Lovato! Realbuto (Ghostlight; Wunderkind; Mean the musical) and a slew of Broadway and television’s brightest stars will come together to celebrate the multiple award winning superstar in an evening featuring the pop sensation’s biggest hits (with a Broadway twist, of course).

Ms. Lovato is known for her acting career (Disney Channel’s “Camp Rock”; “Sonny With A Chance”; Fox’s “Glee”), her rich storytelling through music and words (she published her first memoir entitled DEMI in 2013), her guest judging stint on Fox’s American version of “The X Factor”, but most especially for her exquisite raw vocal talent and stellar four octave range. Ms. Lovato, who also writes the lyrics and composes all of her own music, has spent an unfathomable amount of time on the Billboard Top 100, mostly due to her many megahits, including “Skyscraper”, “Confidence”, “Cool For The Summer”, “Stone Cold”, and most especially for the Kristen Anderson-Lopez and Robert “Book of Mormon” Lopez Disney tuner “Let It Go” from the film Frozen.”

Ticket sales from the evening’s event will help benefit the Save The Music Foundation, an organization that helps raise money to continue music education in public schools (Save The Music happens to be Ms. Lovato’s favorite charity).

The evening has been conceived by Realbuto, with musical direction by Julianne B. Merrill and direction by Paul Mitchell Wilder. The band will consist of Merrill on the piano, Gordon Green on bass, acoustic guitar and cello, Philip Coiro on the drums, and Kate Amrine on the trumpet.

Tickets begin at just $25 and can be purchased by visiting, and use discount code Demi35 for 35% discount!

Tim Realbuto: Made of Glass takes place on Thursday, February 2nd at 9:30 PM at Feinstein’s/54 Below, located at 254 West 54th Street, NYC. For more information on Realbuto, please visit www.TimRealbutoOfficial.com