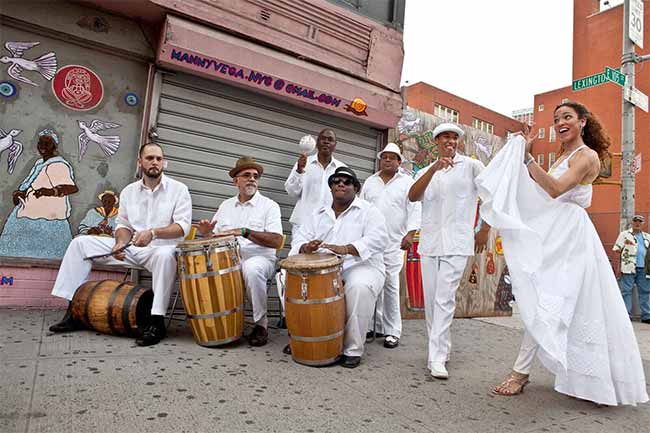 Los Pleneros de la 21. Drawing from Afro-Puerto Rican traditions in music and dance, including the percussion driven bomba and plena, Christmas in El Barrio celebrates community, family, and cultural identity. Tickets for this family-friendly holiday event are $25 (with ½ price tickets available for children 12 and under) and can be purchased in advance at BrooklynCenter.org or by calling the Brooklyn Center box office at 718-951-4500. Day-of-show tickets should be purchased at Kumble Theater on the downtown Brooklyn campus of LIU, located at 1 University Plaza, or by calling the Kumble Theater box office at 718-488-1624.

Founded in 1983 by National Heritage Fellow, Juan Gutiérrez, Los Pleneros de la 21 (LP21) is an East Harlem traditional performing music group and nonprofit organization created to foster awareness & appreciation of bomba and plena, two Puerto Rican cultural expressions. The ensemble, comprised of an intergenerational group of top musicians, performers, and arts educators, have since inception toured to over 200 cities worldwide, bringing bomba and plena to tens of thousands of people from all walks of life.

The unique LP21 sound combines the raw percussion elements of bomba and plena music with contemporary and urban genres like jazz, salsa, son, and even hip hop, creating an infectious rhythm and the highest caliber of musical creativity. For LP21 musical styles, dynamic and highly engaging performance style has brought the group countless critical acclaim and accolades, including a GRAMMY® nomination for their Para Todos Ustedes album and a National Endowment Fellow Award.

For over 3 decades, Los Pleneros de la 21 has crossed numerous boundaries and have broken several performing barriers for the traditional and Latino music genres. They are the first and only bomba and plena ensemble to have toured in the former USSR, and the first to showcase their sounds at Carnegie Hall. They have brought their infectious music worldwide to countries including Australia, Germany, Canada, Cuba, and Thailand.

For their efforts, accomplishments and their cemented dedication to community work, the LP21 familia are regarded by many as mentors. They have fostered the passion and talents of future generations of cultural leaders of Puerto Rican art forms. Internationally, they are regarded as the “Bomba and Plena Ambassadors to the World.”

Alicia Olatuja (March 10, 2018), and Step Afrika! (April 28, 2018). The company plans to announce additional performances in the fall in conjunction with the opening of the new Leonard and Claire Tow Center for the Performing Arts at Brooklyn College. Visit BrooklynCenter.org for a complete season lineup.

Founded in 1954, Brooklyn Center for the PerformingArts at Brooklyn College presents outstanding performing arts and arts education programs, reflective of Brooklyn’s diverse communities, at affordable prices. Each season, Brooklyn Center welcomes over 65,000 people to the 2,400 seat Whitman Theatre, including up to 45,000 schoolchildren from over 300 schools who attend their SchoolTime series, one of the largest arts-in-education programs in the borough. For the 2017-18 season, the company will present at the Kumble Theater on the downtown Brooklyn campus of LIU, while Whitman Theatre undergoes a 12-month closure for structural repairs.  Brooklyn Center will announce additional performances for the spring of 2018 in conjunction with the opening of the new Leonard and Claire Tow Center for the Performing Arts at Brooklyn College.

Brooklyn Center’s presentation of Alicia Olatuja is made possible through the Jazz Touring Network program of the Mid Atlantic Arts Foundation with support from the National Endowment for the Arts.