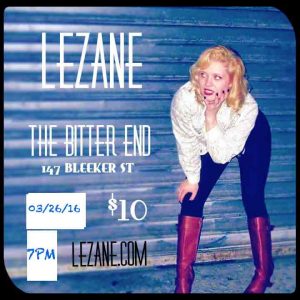 Lezane [email protected] The Bitter End: Do i dare? tour

Following in the footsteps of legendary Bitter End performers such as Tori Amos, Tracy Chapman, Etta James, Lady Gaga, Sarah McLachlan, Joni Mitchell, Carly Simon, Taylor Swift and Lana Del Rey this vibrant emerging artist, LEZANE debuts her original album “Do I Dare?” a mosaic of genres from sultry Jazz to R & B to Indie Rock with an unequivocal energy that resonates the vivacity of her Hell’s Kitchen, New York City hometown.

LEZANE has performed in many NYC venues such as the The Bitter End, Webster Hall, Fontana’s and Millbank Chapel.  Album available on Itunes, Amazon and Spotify.